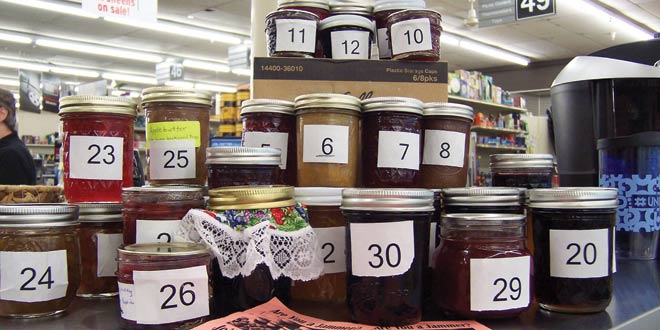 The tasting contest at Gemmen’s Do it Best Home & Hardware began as an experiment to draw attention to the store’s many canning products.

“We have a large canning department that we like to show off,” owner Andrew Gemmen says.

In 2014, the Hudsonville, Michigan, store asked community members to submit samples of their homemade jams, jellies and preserves for a tasting contest. Gemmen’s sent postcards about the contest to customers and also promoted the competition on social media and via email. The contest got 50 submissions. This year, Gemmen’s repeated the event, but cut back on advertising to make the contest less overwhelming, only using social media, email and in-store signage to get the word out.

The August contest came right before fall harvest and coincided with the local fair so residents already competing with their jams and jellies had samples available to enter at Gemmen’s. In came 26 entries, which included flavors such as jalapeno, peach, banana and strawberry.

Andrew Gemmen recruited five customers to taste all of the samples and choose winners. “It’s mainly just done for fun,” he says.

The first- and second-place winners got Gemmen’s gift cards as prizes. The rest of the participants received $10 vouchers to spend on canning items at the store.

Competitors had to go to the store twice—once to drop off their samples and then again to pick up their jars and prizes or vouchers.

“We get a person like that to come in our store two times. That alone is going to help drive traffic,” Gemmen says.

Plus, the friendly competition among neighbors and family members provided free word-of-mouth advertising for the store, he says.

The contest drew attention to Gemmen’s extensive selection of canning supplies, including specialty items such as gaskets for pressure cookers and parts for strainers.

Kate is profiles editor for Hardware Retailing magazine. She reports on news and industry events and writes about retailers' unique contributions to the independent home improvement sector. She graduated from Cedarville University in her home state of Ohio, where she earned a bachelor's degree in English and minored in creative writing. She loves being an aunt, teaching writing to kids, running, reading, farm living and, as Walt Whitman says, traveling the open road, “healthy, free, the world before me.”
Previous Landscape Adhesive
Next Home Sales and Prices Increase in Q3