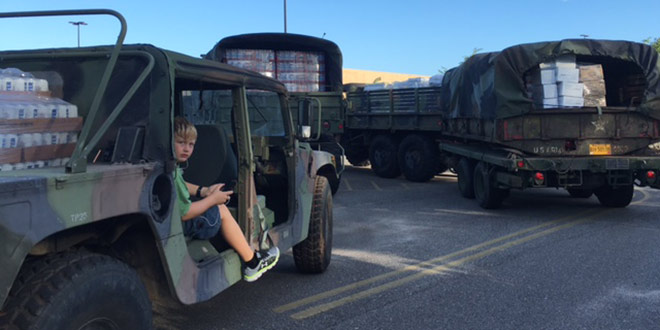 The devastating floodwaters in Louisiana that killed more than a dozen people and heavily damaged thousands of homes and businesses in mid-August inspired a flood of another kind.

Residents, businesses, churches and other organizations organized an outpouring of generosity.

Gerrod Brasseaux’s response was an effort to help his friends and neighbors in Abbeville, Louisiana. Floodwaters rose high in many homes in the small city, and he saw needs and pain in the people around him.

Brasseux owns Brasseux’s True Value Hardware in Abbeville, and his co-op was equipped to help his store react rapidly, sending two emergency truckloads to stock the store with supplies, such as chemicals that kill mold.

James Cabirac, owner of Kief Hardware in Cut Off, Louisiana, and a discount store in Houma, Louisiana, used his businesses as drop-off locations for donations. Businesses offered the use of semi trucks and trailers, and vendors gave pallets of water and cleaning supplies.

His stores sent truckloads full of thousands of dollars in supplies, Cabirac says. His businesses are also matching monetary donations.

“I just think that’s how our culture is in south Louisiana,” Cabirac says. “You don’t even think about it. If you see a need, you just do it.”

Diane Thornhill, manager of Knight’s Ace Hardware in Poplarville, Mississippi, also sent truckloads of water, food and cleaning supplies. Local residents volunteered the use of their trucks and loaded and delivered the donations Knight’s collected.

“We survived [Hurricane] Katrina, and Louisiana helped out,” Thornhill says. “If it was me, I would want someone to help me.”

Picking Up the Pieces

Cabirac’s hardware store is more than an hour away from heavily flood-damaged areas, but he has been able to do more than make donations. On weekends, he has worked alongside people who are ripping out ruined walls and hauling trash out of houses as they try to clean up and move forward.

“It’s almost hard to even put into words,” Cabirac says of the damage he has seen. “In some areas, there is still water in the streets a little bit. It’s almost a sewage smell. It’s ugly. It’s just a big mess. You go down streets and there’s just garbage pile after garbage pile.”

The storm damage in Abbeville varied. Brasseux’s store was untouched, but water rose to 6 feet in some of the homes.

Brasseux extended his business’ hours every day to sell supplies. But he also served as a resource for answering questions about how to use equipment and make repairs.

The day after the flooding began, Brasseux cooked red beans and rice in a 10-gallon pot on a propane burner in front of his store, offering residents a free hot meal, bread pudding and bottled water. He wanted to boost morale as much as he could, he says.

Two of his friends lost their homes, and they and other people came to the store looking beat down from dealing with the weight of the disaster, he says.

“You could see them emotionally drained. That was the hardest,” Brasseaux says. “To see that in people was really tough.”

Kate is profiles editor for Hardware Retailing magazine. She reports on news and industry events and writes about retailers' unique contributions to the independent home improvement sector. She graduated from Cedarville University in her home state of Ohio, where she earned a bachelor's degree in English and minored in creative writing. She loves being an aunt, teaching writing to kids, running, reading, farm living and, as Walt Whitman says, traveling the open road, “healthy, free, the world before me.”
Previous Retailers Find Ideas, New Products at Orgill Dealer Market
Next HDW Fall Market Focuses on American Veterans