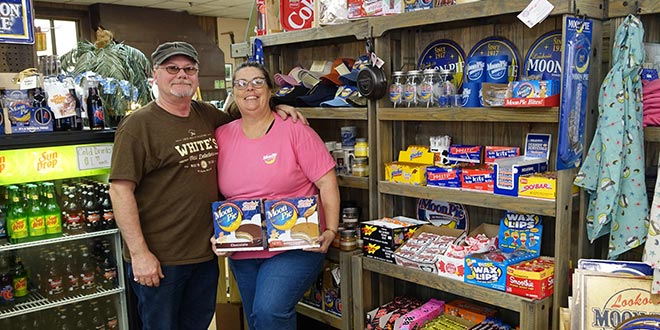 Handy Hardware has a Tennessee flavor that’s a little bit of MoonPie, museum and typical hardware put together.

The Franklin, Tennessee, store is located south of Nashville near a downtown business district that features boutiques, restaurants and high-end chain stores. About half of Handy Hardware’s customers are tourists looking for souvenirs and wanting to explore a local Civil War battlefield.

The store has a product offering geared partially toward locals who need lightbulbs or picture-hanging hooks and visitors hunting for Tennessee-made products. If owners Andy and Donna Willoughby can’t source items from Tennessee businesses, then they try to be sure they’re still made in the U.S.

And for the history buffs, Andy has Civil War stories to retell and his own collection of relics on display.

“If you walk into the store, you can see museum-quality artifacts at no cost,” Donna says.

Handy Hardware is a two-person operation, with Andy and Donna as the only employees on the payroll.

The business has been in Andy’s family since the early 1970s, when his father and a group of investors bought a hardware store that was going to close. The buyers moved the old store into a 1930s building and reopened as Handy Hardware.

Andy eventually took over running the business, and when he and Donna got married, they began managing it together.

The city where Handy Hardware is located was the site of the Battle of Franklin during the Civil War. Andy has been exploring the battlefield with a metal detector most of his life, and he has incorporated the bullets, cannon balls and belt buckles he’s found into the store decor.

He and Donna also display old Coca-Cola bottles, license plates and a deer head on the wall. “It really is a place of Americana,” Donna says.

Kate is profiles editor for Hardware Retailing magazine. She reports on news and industry events and writes about retailers' unique contributions to the independent home improvement sector. She graduated from Cedarville University in her home state of Ohio, where she earned a bachelor's degree in English and minored in creative writing. She loves being an aunt, teaching writing to kids, running, reading, farm living and, as Walt Whitman says, traveling the open road, “healthy, free, the world before me.”
Previous A Year After Orlando Shooting, Hardware Store Continues Community Support
Next Smart Home Device Line