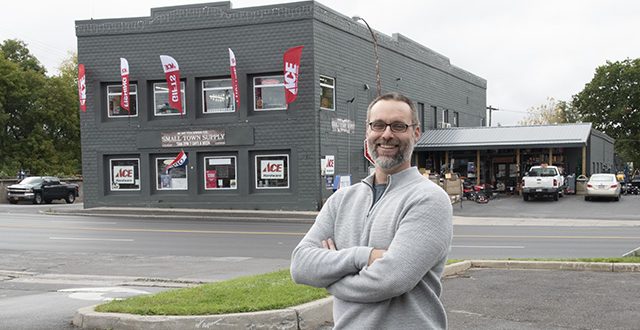 In 2016, Clark Porter took on the massive project of converting a 100-year-old car dealership into Small Town Supply, a 21st century hardware store.

When he bought the old structure that became Small Town Supply, Porter saw potential for a profitable retail location on Main Street in the village of Gouverneur, New York.

He wasn’t going into the project blindly. He had hardware retailing experience from owning a separate home improvement store and remodeling skills gained from other ventures.

Porter saw a business opportunity in the long-empty building, but also the chance to revitalize a corner of his community in upstate New York.

The conversion from a century-old Chevrolet dealership into Small Town Supply’s modern retail space came with unexpected challenges and major investments of time and money. But Porter values the community and cares about seeing it improve and thrive, so he decided to invest instead of choosing the easiest route to opening a new store.

With his reimagination of the building, which opened as Small Town Supply in 2017, Clark Porter created a beautiful and unique community enhancement for Gouverneur.

“I went into it knowing it was going to be a labor of love and there were going to be challenges,” he says.

With his reimagination of the building, which opened as Small Town Supply in 2017, Clark Porter created a beautiful and unique community enhancement.

The Entrepreneur
Porter is a serial entrepreneur who helped pay for college with a business he started at age 12 selling sports trading cards and Ty® Beanie Babies®.

He sees high quality of life, business opportunities and prospects for community revitalization in the rural area where he’s from, in part because it’s home, but also because he’s ambitious.

He has remodeling experience from buying, fixing and reselling homes in the area. In fact, he currently has two house flipping projects in the works. He also owns an empty commercial building across the street from Small Town Supply he expects to develop into a multiuse facility.

But his ambitions are both passionate and grounded in reality. He had his eye on the empty two-story car dealership for a few years before buying it. He thought it was a prime location for a retail store, and he was right.

The first year Small Town Supply was open, the store beat the sales goal Porter’s home improvement co-op set for him by 50 percent.

The Old Building
Small Town Supply is located in the former Seaker-Graves Motor Co. building, which local businessmen built in 1915 to assemble and sell Dodge, Hudson and Buick vehicles.

The company went on to become a Chevrolet dealership, and, until its closure about 10 years ago, still hauled new Corvettes up its freight elevator to display in the second-story windows. 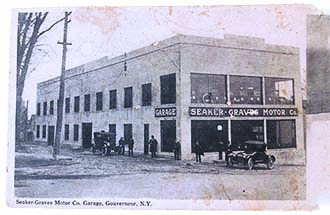 When the economy tanked in 2008, the building ended up empty and for sale for years.

The building was dilapidated by the time Porter showed up at a tax auction, his mind made up that he wanted the prime spot on Main Street for a hardware store. The location and size of the building appealed to him.

Porter attended the foreclosure sale with another local businessman, who advised him that going in determined to buy wasn’t the wisest course of action.

But when the bidding only rose to $5,500, his apprehensions evaporated. Porter was one of very few people who had a new vision for what the old building could become.

He saved money on the purchase price, but he knew his heaviest investment would be in the remodel. Just from touring the building before the auction, he knew the facility was filthy, home to pigeons and insects, and would need plenty of work.

He found out quickly the renovations would be more extensive than he initially thought. For example, the building needed a new roof within the first year.

A bigger surprise was Porter’s realization that the first floor of the building was at grade with the sloping street, which meant it was 18 inches lower in the back than in the front. That may have worked for driving cars in and out of the dealership, but the slope meant Porter couldn’t install store fixtures for stocking and displaying products.

He had planned to keep the original first-story concrete floor, but had to tear it out and haul in 12 dump truck loads of dirt to pour a level concrete floor.

He put in a hydronic heating system in the new floor and insulated the building from top to bottom with spray foam insulation—not cheap projects. The facility also needed new electrical wiring and windows, among other major repairs.

When Porter pulled down the building’s original musty plaster ceiling, he discovered treasures a new building wouldn’t have offered. Underneath the ceiling were wooden beams that, when sandblasted clean, became eye-catching store features.

“It’s really cool. There are little intricacies to the building you just have to see,” Porter says.

The refinished hardwood floor on the second story has the weather-beaten look only years
of use can achieve. For nearly a century, cars rolled across that floor. Paint from the paint booth dripped and motor oil dribbled, leaving scars Porter thinks are beautiful.

And the old freight elevator, which Porter decided was too expensive to repair, now makes for an interesting spot to merchandise products and cut keys.

The Store
The remodeled store, with its exposed wooden and metal beams and other rustic details, is crammed with products and has become a destination for a range of categories. The 13,000-square-foot salesfloor carries the core hardware categories, as well as paint, boots, some clothing and a large toy and gift department.

The hand and power tool selection appeals to highly skilled tradespeople who live near Gouverneur but work all throughout the U.S., Porter says. And residents from the village and its surrounding area come to find unique home decor and gift items.

“It doesn’t have the feel of a big-box store or dollar store,” Porter says.

The nearest large national retail stores are about 30 miles away. Small Town Supply provides competitive pricing and unique items, so locals don’t have to leave the area to shop for home improvement supplies. Plus, visitors travel from miles away to see the unique building and buy from the store’s broad product selection, which is unusual for the area.

Porter initially wasn’t sure how popular the upstairs selling space would be, but shoppers consistently climb the steel and wooden stairs to enjoy the beautifully merchandised gift and toy area.

“We’re bringing people into the community because we’ve got a cool store,” Porter says.

Area residents often pause to thank Porter for cleaning up a large building that used to be a community eyesore.

“It was very deteriorated,” he says. “People in the community say, ‘I can’t believe how gorgeous this store is now. Thank you so much.’”

See More of the Updated Store
Walk through Small Town Supply via video at TheRedT.com/store-tour. In the video, Porter points out original features of the building, which started out as a car dealership in 1915. The remodeled store sells the core home improvement categories, plus gifts and toys.

Kate is profiles editor for Hardware Retailing magazine. She reports on news and industry events and writes about retailers' unique contributions to the independent home improvement sector. She graduated from Cedarville University in her home state of Ohio, where she earned a bachelor's degree in English and minored in creative writing. She loves being an aunt, teaching writing to kids, running, reading, farm living and, as Walt Whitman says, traveling the open road, “healthy, free, the world before me.”
Previous Ace Hardware Sees Revenue and Income Climb
Next Expert Perspective: The Growth of Dollar Stores