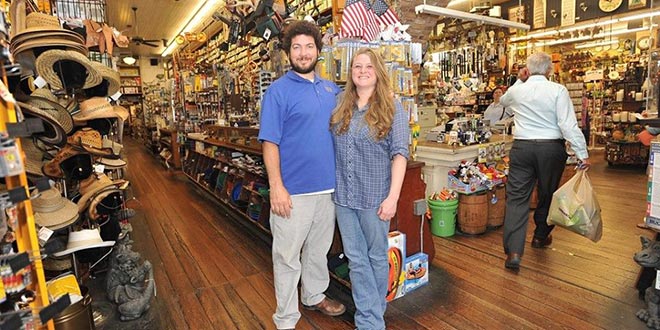 When the state of California was bustling with thousands of miners eager to strike gold in the 1800s, Placerville Hardware sold supplies to the fortune seekers and accepted gold dust as payment.

Today, the clientele has changed, but the original wooden floors, sliding ladders and slotted wooden counters bespeak an era of outlaws and gold diggers.

Placerville Hardware is considered the oldest hardware store west of the Mississippi, having been founded in 1850 before the city of Placerville, California, even existed.

Several store characteristics are rich with Wild West history, and the wooden counters even have slots carved into them to accept gold dust instead of money, which was a common practice during the early gold rush, says Albert Fausel, whose family owns the business.

“The clerk would carefully sweep the gold into the slot, where it was caught by a scale. On the floor directly under it, a cloth was spread to catch any errant flakes,” Fausel says.

In its first 50 years in business, the store’s name and owners changed six times, until Placerville Hardware became the name in 1907.

George Fausel bought the business in 1952 and the store has remained in the Fausel family ever since. Today, David and Deanna Fausel are the owners and their oldest son, Albert, and his wife Melissa run the operation.

Albert Fausel enjoys keeping the store’s history alive by sharing stories and showing off historical features to visitors while they shop.

“It’s amazing to think Black Bart or other famous outlaws and lawmen stood on these very boards,” Fausel says.

Rolling ladders were added to the store in 1900, and the staff still uses them to find and retrieve inventory from a wall of drawers that goes from the floor to the ceiling.

People have come from all over the world to visit the hardware store, eager to learn about the gold mining days and hear the history of the business.

Fausel makes himself available to share stories with visitors as interested in the history as he is.

“For me, the real gold shows up in the enthusiasm of newcomers or children learning for the first time about Placerville’s role in the events that changed everything,” he says. “That’s what I call a good day.”

For the locals who shop at Placerville Hardware, the store offers a wide array of products, including gifts, gold panning supplies, metal detectors, kitchen items and, of course, hardware.

Albert and Melissa’s infant son, Ajay Fausel, is often at the store with his parents while they work.

“He doesn’t know he’s the next owner of this internationally famous place,” she says.

Renee Changnon is the retail outreach coordinator for NRHA. She meets with retailers in their stores and at industry events and introduces them to the services NRHA provides. Renee previously worked as a member of the NRHA communications team. She earned a degree in visual journalism from Illinois State University, where she served as the features editor for the school newspaper. After college, she implemented marketing and promotions initiatives at Jimmy John’s franchise locations across the country. She enjoys exploring books with her book club, Netflix marathons and hosting goat yoga at her apartment complex. Renee Changnon 317-275-9442 rchangnon@nrha.org
Previous Partnership Lets Customers Buy Products and Installation Services Online
Next DIY Paint Brush