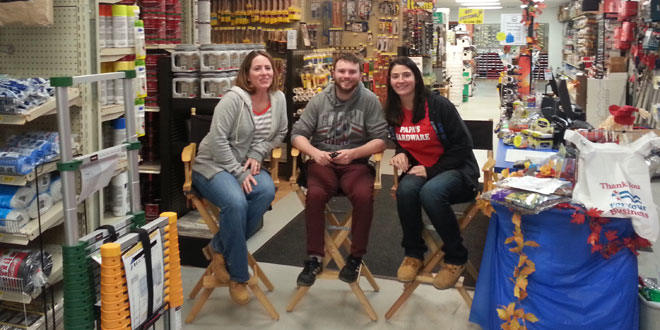 One local retailer has gotten a taste of Hollywood.

Last fall, Papa’s Hardware in Shrewsbury, Massachusetts, was the site for an independent movie being shot in the area. The movie, titled “The Fixer Upper,” features a couple who buys and fixes up an old home. Papa’s Hardware is the local hardware store they visit to buy their materials.

The shoot only required one day, so Betti and the producers worked together to schedule a day for the film crew to visit. “They said it was a small independent film, so I expected two guys and a camera,” Betti says. “They showed up with two trucks and lots of equipment. It was quite impressive.”

Assistant managers Andriana Betti and Paula Rubley even got to be extras in the film.

The store got a little free advertising, too. The local media picked up the story of the shoot, which brought more customers into the store, Betti says. Also, the exterior Papa’s Hardware sign will appear in the film, and Ana Betti and Rubley wore Papa’s Hardware shirts in their scenes.

“I know that’s probably not the most prudent way to do advertising, but we didn’t do it for the publicity,” says Betti.

Liz is the special projects editor for Hardware Retailing magazine. She reports on news and trends, visits retailers, and attends industry events. She graduated from Xavier University, where she earned a degree in English and Spanish and was a member of the swim team. Liz is a Louisville, Kentucky, native who lives in Indianapolis with her husband and two children. She enjoys swimming, reading, doing home improvement projects around her house and cheering on her two favorite basketball teams, the Kentucky Wildcats and the Xavier Musketeers.
Previous Handheld Multi-Tool
Next Handy Hardware to Retire Name at Spring Market