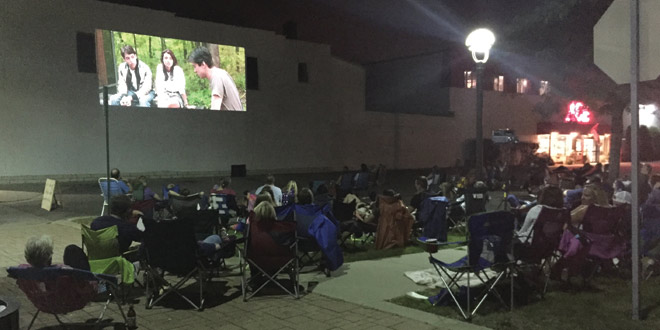 “How can we use the wall?” That was the question on the mind of general manager Daniel Buzzell at Midland Ace Hardware and Sports. The large, blank, white outside wall of the store would be a good place for a mural, as many retailers have done with the sides of their buildings, but Buzzell had another idea. The wall would make a good movie screen and also offer an opportunity to draw the community together and promote more nightlife in downtownMidland, Michigan.

It didn’t take long for that idea to take shape. Buzzell collaborated with a local organization dedicated to promoting and investing in downtown Midland. He got a few local businesses to help sponsor the event, and Movies on Main premiered this past August on Wednesday evenings after dark. Buzzell invited the public to set up their lawn chairs in the store’s parking lot to watch a family-friendly movie projected on the side of the building.

While the movie was free to the public, Buzzell still had some costs to cover, so he solicited help from neighboring businesses.

“I picked up several sponsors for the movie so we weren’t footing the entire bill,” he says. “They each got a spot at the beginning of the movie to talk about their business. Some of the businesses sponsoring the event are also our customers, so this has helped us reinforce those relationships.”

Costs for showing a movie to the public includes a license fee (a fee based on the number of people attending the movie showing) and the rental of a projector—a total of about $800 per event. He also had to bring in a portable bathroom, since most nearby businesses, including his store, were closed during movie time. The only advertising he did was through Facebook, which helped drive traffic to the store’s page.

Given that each of the four movie nights Buzzell hosted this year averaged 100 people, and that they generated excitement among his customers, he considers the idea a success. In the future, though, he hopes to find ways to drive traffic into the store.

“This year was a test run to see if it’s something we want to do in the future,” he says. “This wasn’t a retail driver as much as it was a community event. Next year, we’d like to look for more business opportunities, such as offering some of our impulse items, like snacks and drinks, for sale. There are also a lot of younger people in town who don’t realize we’re a locally owned business, and this gives us another way to promote that.”

Lynnea is the senior graphic designer for Hardware Retailing magazine, where she works on the layout and design of the magazine and other custom publications. She also does print design for NRHA’s marketing materials, programs and other in-house projects. Lynnea graduated from Ball State University with a degree in Graphic Design. She lives in her hometown of Greenwood, Indiana. During her free time, she enjoys designing, painting, reading and volunteering at her family-owned childcare facility.
Previous Lawn Greetings
Next Red Wine Stain Remover