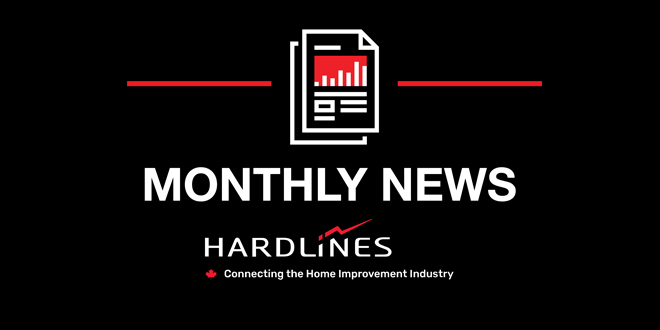 Each month, Hardware Retailing shares industry news from Canada. For the full story of each of these briefs, visit hardlines.ca/hr.

Lowe’s Canada recently announced that it will shutter 34 stores across the country. Most of the closings will be effective January 31, 2020, with some, including three in Nova Scotia, to take place in mid-February. The move follows what the company called in “a detailed strategic review of its operations to improve performance and better position itself for the future.” The closings include Lowe’s and RONA stores across the country, plus a Reno-Depot location in Trois-Rivières, Quebec. Lowe’s Canada will also undertake a process to simplify multiple store brands, “to drive efficiency and reduce operational complexity.” However, the company says it will continue to support its core banners.

During BMR’s fall retailer show held in Quebec City, Hardlines sat down with Martin Ménard, BMR’s vice president of hardware and imports, to discuss the company’s expansion efforts, both within its home province and beyond. In 2019, BMR signed three retailers in Ontario, including Richmond Building Centre in Ontario under owner Doug Kazda. The first was Griffith Building Supply in Griffith, owned by John Lacourse and Derek McGrimmon. That store also ended up becoming the first BMR retailer to adopt BMR’s pro branding, catering to the professional market. In addition, BMR hired Jason Hamburger to the newly created position of business development manager, Ontario, reinforcing the company’s commitment to that market. Then, in July, BMR announced the signing of Feldman Timber Co., a family-owned business headed by Lorne Feldman, in Timmins, Ontario.

TIMBER MART has added Morin Bros. Building Supplies Inc. to its membership. Located in Ottawa, Morin Bros. joined January 1, tapping into the buying power of the country’s second-largest stand-alone buying group. It’s the second sign-up TIMBER MART announced in as many weeks. Cornerstone Building Supplies in Kingston, Ontario, is another independent retailer to join the buying group. While Morin Bros. has been in operation nearly 34 years, Cornerstone was opened recently by owner Mason Laframboise.

Following a flurry of changes, WSB Titan is preparing for its next steps as two senior members of the national drywall, steel framing and insulation supplier network move into retirement. Doug Skrepnek, president of WSB Titan and president of the Canadian division of parent company GMS Inc., had been actively building Titan’s presence in Canada when it got a takeover offer of its own. Now Skrepnek says he’s stepping back to assume a consulting role at WSB Titan. Travis Hendron took over Skrepnek’s role in January. Hendron, a vice president with GMS in the U.S., formerly headed up that company’s mergers and acquisitions group. He went to Canada in June from Atlanta.

Born in Indiana and raised in Indiana, Germany and Virginia, Hans has worked for NRHA since 2001. He has a B.A. in English from Indiana University and is a published fantasy and science-fiction author. His hobbies include cooking, especially smoking meats, tabletop and video games and supporting space sciences and science education.
Previous Concrete Mix
Next Electrical Outlets