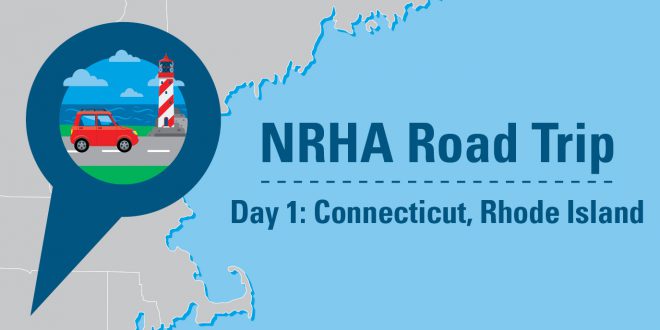 After months of planning and coordinating with retailers to finalize all the details of the North American Retail Hardware Association’s (NRHA) latest road trip, the adventure finally began.

My name is Renee Changnon and I’m the retail outreach coordinator with the NRHA. From Aug. 5-9, I’m leading the charge on NRHA’s New England Road Trip. The journey will cover over 1,300 miles, allowing me to visit independent lumberyards, hardware stores and home centers all over New England, including: Connecticut, Rhode Island, Maine, New Hampshire, Vermont and Massachusetts.

Before the road trip began, I flew into Boston and stayed in New Haven, Connecticut. On Monday, Aug. 5, I went on a quick morning walk-through of Yale University’s campus before I hopped in the car and made my way to the first independent hardware store of the trip.

When I pulled up to Hemlock Hardware in Fairfield, Connecticut, I was warmly greeted by their team of employees. Store associates Timothy Beers and Bradley Carter gave me a tour of the store, which was well-merchandised and carefully organized. When customers first walk in, they see some of the business’s key products, which include Yeti items and a variety of grills, which are popular among their customers. The operation is also known for great its services, like next-day delivery of grills.

After spending time there, I headed east to Steward’s Hardware Co. in Clinton, Connecticut. I spoke with co-owners Todd Steward and Cherie Sears-Thompson. The business has been in operation since 2008, but Steward has had a long history in the industry. In the late 1990s, he began working at a local business and later went into law enforcement, which took the family to Virginia Beach. Later, they decided to return to their hometown of Clinton, Connecticut, to open a hardware store. In addition to have a strong team of hardworking employees, the business is also known around town for its funny local commercials that feature Steward and other employees.

The last visit of the day was at Adler’s Design Center & Hardware in Providence, Rhode Island. The business is celebrating 100 years of operation in 2019 and had signage and fun merchandise celebrating that milestone throughout the store. I spoke with co-owners and cousins Harry and Marc Adler, who both shared how special it was to celebrate 100 years and how their business remains an important part of the community. The store really stands out in a variety of categories, including paint, wallpaper, fabric and decorative hardware.

The next day was to be spent in retail operations in Maine, so I left Providence and made my way to Portland, Maine, for the evening. After a three-hour drive, I grabbed dinner in Portland  and then called it a night. My colleague Kevin Trehan arrived late that evening and we planned to get up early on Tuesday, Aug. 6 to continue the trip together.

Make sure you stay tuned on NRHA’s Instagram and Facebook to see where we’re at and follow along on Hardware Retailing each day for recaps of the stores visited on this journey.

Renee Changnon is the retail outreach coordinator for NRHA. She meets with retailers in their stores and at industry events and introduces them to the services NRHA provides. Renee previously worked as a member of the NRHA communications team. She earned a degree in visual journalism from Illinois State University, where she served as the features editor for the school newspaper. After college, she implemented marketing and promotions initiatives at Jimmy John’s franchise locations across the country. She enjoys exploring books with her book club, Netflix marathons and hosting goat yoga at her apartment complex. Renee Changnon 317-275-9442 rchangnon@nrha.org
Previous Pizza Oven
Next Animal Lovers Make Good Customers