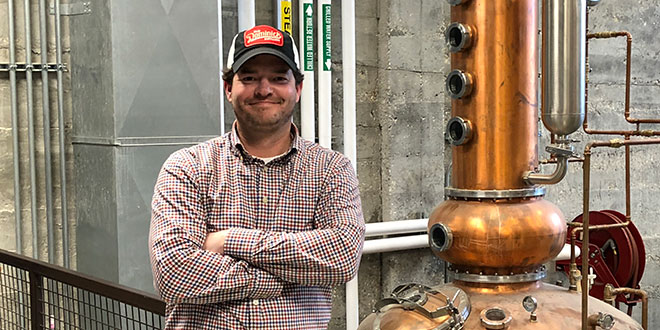 At the midpoint of the Independent We Stand Great American Red, White and Q Road Trip, our group was ready to continue the journey from Day 2 in Nashville to our third location: Memphis, Tennessee.

What made this visit so different is that it is the first city Independent We Stand had already profiled during a previous road trip. Read this post to learn about our visit to Memphis in 2018 during the Great American River Road Trip. To keep our return visit to Memphis fresh, we found new businesses to highlight.

After snagging a photo by the iconic “I Believe in Nashville” sign and grabbing coffee from a local coffee shop, our group started the three-hour trip west across Tennessee to get to Memphis, the land of Blues and barbecue.

When we got to Memphis, our first interview was at the Century House with founder Anton Mack. The Century House is a private social club located in the downtown South Main Historic Arts District of Memphis and is housed in the former 20th Century Fox Pictures Building.

The club features a collection of classically styled rooms, bars, lounges, offices and a state-of-the-art screening room. The social club brings together Memphis residents from a variety of backgrounds. The concept for the club came to Mack after living in Europe for a few years, he says.

“Our activities include social hours, cocktail events, member events, everything from karaoke to the incredibly competitive game night,” Mack says. “We’re a combination of a social club, professional development center and we also have a co-working space.”

According to Mack, shopping local not only gives people the chance to discover unique items and services, but it also helps ensure local economies continue to thrive and money is distributed evenly, rather than all going to a handful of major corporations.

Mack says few people realize how many small businesses operate in the country and how many people depend on their success for their own livelihoods.

In addition to owning a social club, Mack is also the president of the South Main Association, which is made up of residents, merchants, and friends of the South Main Historic Arts District in Memphis. The purpose of the association is to promote community’s future potential while celebrating and preserving its past.

“I think a lot of people moved out of downtown for a while and moved to the suburbs, but now more people are returning downtown,” Mack says. “One of the challenges Memphis and many downtowns face is how to take existing real estate and turn it into something that will be functional and practical moving forward and retain its historic nature.”

After talking with Mack, we went to Stock & Belle, a lifestyle retail store. We met Bailey Biggers, owner of Low Fi Coffee. The coffee shop is located within Stock & Belle and is in the midst of a total remodel. What makes the coffee shop  unique is that it serves customers drinks without additives or sweeteners.

Biggers spoke about the difference between getting coffee at a local establishment versus a corporately owned coffee chain.

“For my husband and I, when we think about the most important values for a small business, our No. 1 priority is quality,” Biggers says. “That’s a choice we made as a business and that’s not always a choice big-box chains make. We are able to make a principled decision and execute financially behind that value rather than just focus on finances. It helps us stay connected to our product.”

“Americans should support their Main Streets because it’s what we like about each other,” Biggers says. “You don’t go vacationing in Rome to see a big-box store. You go to see the piazzas and the old culture and the ways of life that are unique to that specific place. That’s what Main Street is in America. It is a place that celebrates our specific cities and  cultures to share what’s unique with each other.”

The last location we visited in Memphis was Old Dominick Distillery, where we met owner Chris Canale. Before sitting down to interview him, Canale gave our group a tour of his facility, where we got to see the entire process of making whiskey and other spirits.

The family-owned and -operated distillery has roots that go back to 1866 when it began as D. Canale & Co., a food wholesaler. One of the products the business sold was a whiskey called Old Dominick, which was in production from the 1800s until it stopped because of prohibition.

Cousins Chris and Alex Canale discovered an unopened bottle of Old Dominick Toddy from the 1800s and decided to reinstate the spirit brand founded by their great great grandfather Domenico. As a member of the fifth generation to run the family business, he says it’s important to act like the first generation.

“Working with family has its ups and downs,” Canale says. “Mostly it’s all positive. There’s an old saying that every generation in a family business has to be the first generation. We say that and take it very seriously. We all work hard and try to treat our people like family. And to see Memphis gain some national and international notoriety for all the positive things happening here is awesome,” he says. “”It’s a honor to be a part of that.”

After wrapping up our interviews in Memphis, we couldn’t pass up the chance to have dinner at Charlie Vergos Rendezvous, a famous barbecue restaurant that’s been in the area since 1948.

Renee Changnon is the retail outreach coordinator for NRHA. She meets with retailers in their stores and at industry events and introduces them to the services NRHA provides. Renee previously worked as a member of the NRHA communications team. She earned a degree in visual journalism from Illinois State University, where she served as the features editor for the school newspaper. After college, she implemented marketing and promotions initiatives at Jimmy John’s franchise locations across the country. She enjoys exploring books with her book club, Netflix marathons and hosting goat yoga at her apartment complex. Renee Changnon 317-275-9442 rchangnon@nrha.org
Previous Multipurpose Smart Alarm
Next Hit the Road With Renee: Family and Community Unite in St. Louis