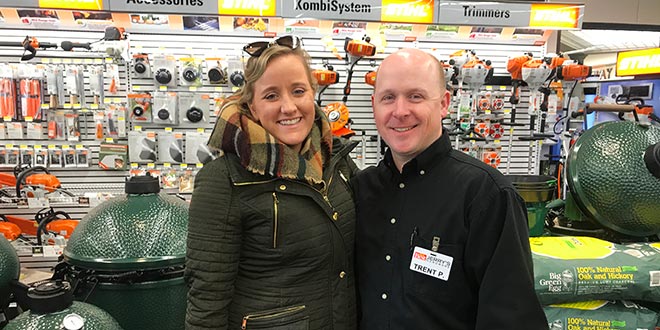 Two years ago, I joined up with Independent We Stand on their annual road trip, vising independent businesses along Route 66, from Oklahoma City to the Santa Monica Pier. I tagged along as a representative of the North American Retail Hardware Association (NRHA), visiting locally owned hardware and home improvement stores and many other establishments to see firsthand the important role they play in their communities.

This week, I’ve joined Independent We Stand once again for The Great American River Road Trip. Together, we’ll travel 1,400 miles along the Mississippi River with stops in multiple cities along the way. We’ll stay at independent hotels, eat local cuisine and shop like the locals do to see how independent businesses are pushing themselves—and their communities—forward.

On Sunday, I flew from Indianapolis to Minneapolis to meet the crew from Independent We Stand as we prepared to start the trip. After I touched down, I headed to Hotel 340 in St. Paul, Minnesota. The hotel is located inside the historic St. Paul Athletic Club building, which first opened its doors in 1917. In 2008, Hotel 340 opened with 37 hotel rooms, and in 2013, the St. Paul Athletic Club itself had a grand reopening. Today, guests of the hotel are welcome to use the athletic equipment in the 70,000-square-foot club, relax in the main lobby with a cocktail or simply rest in their hotel rooms.

After I checked in, I reunited with Bill Brunelle, co-founder of Independent We Stand; Katherine Seibt, communications manager for the organization; and videographer Scott Sonneberg. We were eager to discuss the trip ahead of us and try the great food and drink Minneapolis independents had to offer.

First we made our way to 12welve Eyes Brewing in St. Paul to catch up. We capped off the evening at The Bulldog with a drink, cheese curds and delicious burgers before turning in for the night and our first full day on the road.

After getting a good night’s sleep, we piled into the SUV to begin The Great American River Road Trip. Our first stop of the day was Jerry’s Do it Best Hardware & Rental in Eden Prairie, Minnesota. This store is the most recent addition to the retail operation, which now includes five hardware stores in Minnesota and the chain of Jerry’s Foods shops, which is the fourth-largest independently owned chain of grocery stores in the nation.

At the store, we spoke with Trent Pearson, manager of the Jerry’s Do it Best Hardware & Rental Eden Prairie location and an army reservist. Pearson has been a part of the business since 1998 and was involved in opening the new store. When asked what role Jerry’s plays in the local community, he stressed its ability to serve customers on a direct level.

“Jerry’s supports the community by trying to be more of a community center for the local residents,” Pearson says. “We try to provide services and products that our demographic needs so they can come to us to get items they’re not going to find elsewhere.”

On top of sharing how the business connects with its residents and supports its military customers, Pearson discussed why he believes it’s so important for residents to shop local.

“People should support local businesses like Jerry’s because those who work here are part of the local community,” he says. “If we don’t have that local support, we wouldn’t be able to be here and be the community center.”

We next headed to Hirshfield’s, an independent paint and decorating business that also manufactures its own private-label paints.  CEO Hans Hirshfield and his daughter, Sam, told us that the business has been in operation since 1894 and has made many changes to remain thriving.

While they had once been heavily involved in wallpaper, the company shifted gears as trends and tastes turned. Today, the business includes a chain of independent paint and design stores in Minnesota, and it also manufactures paint sold nationally and internationally under private labels.

Before visiting the rest of our stops in Minnesota, the group grabbed lunch at Holy Land Bakery and Deli, a Middle Eastern grocery store with an attached deli and bakery. Guy Fieri visited the restaurant during an episode of his television show, “Diners, Drive-Ins and Dives,” so we were excited to give the acclaimed food a try. We weren’t disappointed!

After lunch, we walked across the street to our next stop on the Great American River Road Trip, Fair State Brewing Cooperative, a craft brewery started by president and CEO Evan Sallee. The brewing co-op truly brings beer aficionados together, allowing them to own a slice of the business as co-op members.

We also met Loren Schirber, board member of the NorthEast Investment Cooperative, which was founded by a small group of community members who wanted to collectively purchase, renovate and manage properties in the city. In addition to helping bring Fair State Brewing Cooperative to the masses through its initiatives, the organization also helped Aki Berndt, owner of Aki’s BreadHaus, find a location to open his own business.

Berndt shared his story of moving to the U.S. from Germany. After arriving in the country, he decided to open a bakery to share his favorite baked goods, like traditional pretzels, breads and rolls, with the Minneapolis community.

After enjoying some craft beer and delicious pretzels, the crew hopped back in the SUV and said goodbye to Minnesota. We headed to La Crosse, Wisconsin, for our evening stop before Day Two of the Great American River Road Trip brings us to Davenport, Iowa.

Check in tomorrow to read about our evening in La Crosse, Wisconsin, and our day in Davenport, Iowa. And remember to follow along on NRHA’s Instagram and Facebook page for frequent updates.

Renee Changnon is the retail outreach coordinator for NRHA. She meets with retailers in their stores and at industry events and introduces them to the services NRHA provides. Renee previously worked as a member of the NRHA communications team. She earned a degree in visual journalism from Illinois State University, where she served as the features editor for the school newspaper. After college, she implemented marketing and promotions initiatives at Jimmy John’s franchise locations across the country. She enjoys exploring books with her book club, Netflix marathons and hosting goat yoga at her apartment complex. Renee Changnon 317-275-9442 rchangnon@nrha.org
Previous Orgill, Inc. Announces Passing of Former President, Chairman
Next Picnic Basket Kit