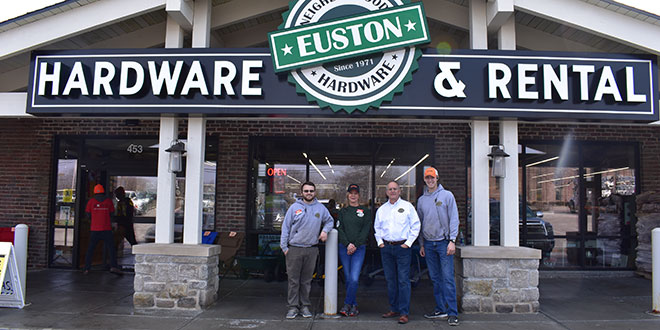 Hit the Road With Renee: There’s No Place Like Kansas City

After wrapping up Day 4 in St. Louis for Independent We Stand‘s Great American Red, White and Q Road Trip, our group was ready to make our way to the last stop of the five-day trip: Kansas City, Missouri.

Early Friday morning, our team packed up the van one last time and hit the road from St. Louis to embark on the four-hour drive to Kansas City, Missouri. I was eager to get to town, because we would have the chance to visit two different hardware stores on the last day.

Our first stop in Kansas City was Fiorella’s Jack Stack Barbecue. Around since 1957, the restaurant chain is now a family operation owned by the third generation that has grown to five locations and operates a catering company serving Kansas City barbecue across the country.

After filling up on barbecue over lunch for one last time, our group piled back in the van and took off for Family Center Farm and Home in Paola, Missouri. While at the store, we met Bill Mills, owner of the six-store, family-owned chain in Missouri and Kansas.

“Locally owned businesses create unique communities because, in my viewpoint, they are the foundation of the community. Without a good foundation, you don’t have a good house,” Mills says.

He believes local businesses have a mandate to be involved with their communities’ overall success.

Family Center Farm and Home is active in the community by giving back as well, Mills says.

“Our operation sponsors many local events, like fairs and 5K runs,” Mills says. “In this particular town, we’re very active in the rotary club. Whatever happens throughout the year, we’re glad to help if we can. In my opinion, if you just sell but you don’t participate in your community, that’s a slow death. You need to participate and the community recognizes that. It’s appreciated and it’s a good overall feeling for everybody.”

After touring the store, we left and made our way to Euston Hardware in Kansas City, where we met owner Kevin Euston. The operation opened when Euston was in high school and he helped his dad from the start. After graduating college, he and his dad opened a second location and he’s been with the business since then. Today, they have four hardware locations.

Over the years, Euston has built relationships with his employees as well as his loyal customers, many of whom are second-generation shoppers at the business.

“About a month ago, I was called to the salesfloor from my office and had a customer ask to talk to me,” Euston says. “He said, ‘You probably don’t remember me,’ and then I told him I did and said his father’s name. His jaw dropped and he started crying. He told me his dad, who had passed away, loved the store and always talked about how much he liked shopping here. It brought tears to his eyes that I remembered his dad. These are experiences we have quite often, and it really makes you feel good.”

Our last stop of the day was at Oddly Correct, a coffee roaster, art shop and cafe located in Kansas City. While at the shop, we spoke to owner Gregory Kolsto.

“Our business is known for really high-quality coffee and a gritty curiosity to what we do here,” Kolsto says. “Unlike the national coffee chains, our operation offers flexibility, personality, soul and a more intimate connection with our customers.”

Before wrapping up a week of traveling, barbecue tasting and small business visits, we had one interview left with Diane Burnette, executive director of Midtown KC Now.

According to Burnette, the organization is the leading community partner working to support commercial, mixed-use and residential progress. The organization also supports economic and aesthetic development to encourage the vitality of Midtown Kansas City.

After our last interview, the team made its way to Crossroads Hotel. Located inside a former Pabst brewing facility, the space merged the unique characteristics of the past with a modern stylistic take.

We wrapped up the trip with a round of drinks and pizza to celebrate. After five cities in five days, we accomplished our goal of covering more areas of the country to celebrate what makes independent businesses unique, vital and thriving.

Renee Changnon is the retail outreach coordinator for NRHA. She meets with retailers in their stores and at industry events and introduces them to the services NRHA provides. Renee previously worked as a member of the NRHA communications team. She earned a degree in visual journalism from Illinois State University, where she served as the features editor for the school newspaper. After college, she implemented marketing and promotions initiatives at Jimmy John’s franchise locations across the country. She enjoys exploring books with her book club, Netflix marathons and hosting goat yoga at her apartment complex. Renee Changnon 317-275-9442 rchangnon@nrha.org
Previous NFIB Small Business Day Empowers Business Owners
Next Hit the Road With Renee: Barbecue and Small Business Make Lasting Impressions