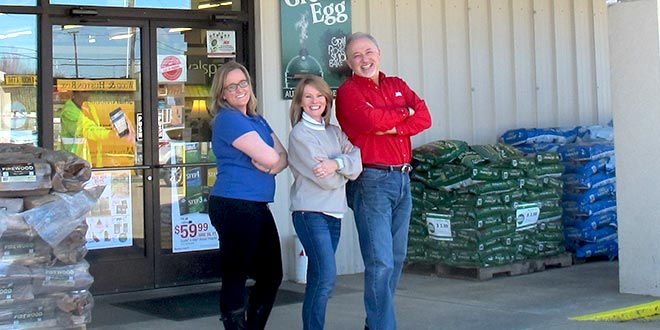 After finishing up our interviews in Davenport, Iowa, on Day 2 of the Great American River Road Trip, we went to Up, the rooftop bar on top of The Current. We enjoyed some great food and drinks before heading back to our well-appointed rooms where everyone was able to have a taste of home and a bit of luxury. The hotel featured high-quality amenities, with a TV built into the bathroom mirror, a rainfall shower head and toilets with heated seats and built-in bidet.

By 5:30 a.m. the next day, we were well-rested and back on the road to journey to Cape Girardeau, Missouri, for Day 3 of the Great American River Road Trip! 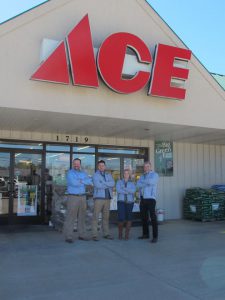 The third day of our road trip had us driving for most of the morning, with a six-hour trip from Davenport, Iowa, to Cape Girardeau, Missouri. Once we arrived in town, we made our way to Elias Ace Hardware, where the majority of our interviews were scheduled to take place.

We were immediately welcomed to the business and to the Cape Girardeau community by Fred and Tammy Elias, owners of Elias Ace Hardware. They shared their story of how they met working in Fred’s family hardware store, got married and had children.

The business was founded in Illinois, and they later opened a second location in Cape Girardeau, which is now their only location. The family moved to Missouri 20 years ago, and opened their hardware store 18 years ago. Now they say Cape Girardeau is the place they plan on staying the rest of their lives.

When it comes to their customers, Fred says they return because they know the employees will be able to not only stock the items a customer needs, but they can also demonstrate how an item works. According to Tammy, that advantage stems from having knowledgeable employees.

“We have a great team who genuinely like being around people and will go the extra mile for our customers,” Tammy says. “Customer service is huge. We’re all selling the same kind of stuff, but we’re there for the extra level of service you won’t find in the big-box stores. Or if you do, it’s rare.”

During their interview with Independent We Stand, they also shared what they did to support the Houston community after Hurricane Harvey hit. 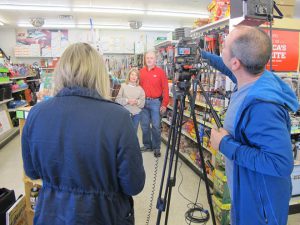 “A team from our church, La Croix Church, was going down to Houston after the hurricane,” Fred says. “Our daughter, her husband and three children had moved to Houston 10 days before the hurricane. Our entire community came together to pray and send materials to those affected by the hurricane. We couldn’t leave, but it was so good to know others were able to go and help where we couldn’t.”

The couple also shared their support of a wide array of programs in the community. While they help their community whenever and however they can, Tammy says their introduction to Heroes Way, a nonprofit organization devoted to erecting highway memorial signs honoring soldiers lost in combat during the wars in Iraq and Afghanistan, was a mission they truly connected with.

“I come from a military family with a brother still active in the military and another who served and is now a police officer,” Tammy says. “My friend Melanie Gutwein, a board member for Heroes Way, invited us to attend a fundraiser, where we were able to meet the Gold Star families who had loved ones that made the ultimate sacrifice. We feel very passionate about supporting our servicemen and servicewomen, and this organization is a great way to do that.”

After having a great conversation with Fred and Tammy, we were introduced to Gutwein from Heroes Way and she shared more about the nonprofit organization.

We then spoke with Scott Crader, co-general manager of Crader Distribution Co., the exclusive distributor of STIHL Outdoor Power Equipment in Missouri, Kansas, Nebraska and southern Illinois. As a family business that serves other family businesses, like Elias Ace Hardware, he was able to share the importance of not only shopping locally but also buying quality equipment from independent businesses, which is where STIHL equipment is exclusively sold.

Our last stop of Day 3 of the Great American River Road Trip was at The Southerner by Tractors, a new southern-style restaurant in Cape Girardeau. We met the owners, Steve and Teresa Blankenship, who shared their love of good food with the Cape Girardeau community. The new restaurant is the Blankenships’ second culinary venture after previously opening a restaurant in Jackson, Missouri. According to Teresa, the new location brings a new twist to traditional southern cuisine.

After wrapping up our interview, we enjoyed dinner at The Southerner and then headed to our hotel as we prepared for another day of hitting the road and seeing how independent businesses along the Mississippi River are connecting with customers and enriching the communities they serve.

Renee Changnon is the retail outreach coordinator for NRHA. She meets with retailers in their stores and at industry events and introduces them to the services NRHA provides. Renee previously worked as a member of the NRHA communications team. She earned a degree in visual journalism from Illinois State University, where she served as the features editor for the school newspaper. After college, she implemented marketing and promotions initiatives at Jimmy John’s franchise locations across the country. She enjoys exploring books with her book club, Netflix marathons and hosting goat yoga at her apartment complex. Renee Changnon 317-275-9442 rchangnon@nrha.org
Previous Flavored Nuts
Next Hit the Road With Renee: Strong Opportunities in Memphis, Tennessee