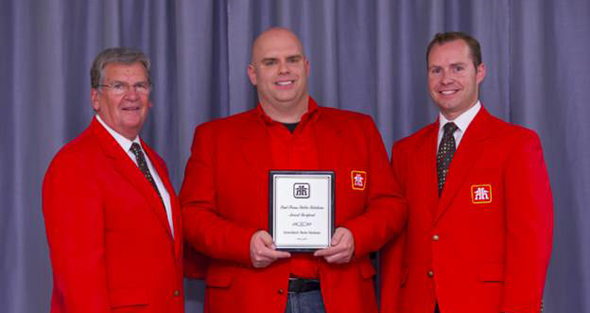 Gravenhurst Home Hardware was recognized for its dedication to social and community causes.  This year, the McNaughtons raised $750 for the SickKids Foundation at their second annual Ladies Night, donated a pair of cedar Muskoka chairs to support the Celebrity Fundraiser for SickKids (the chairs brought more than $3,000 at auction), have had four “hole-in-one” charity golf tournaments and were asked to carry the torch for the 34th Annual KOA Kids for Cancer Golf Tournament.

The store has also supported several other initiatives within the community including the local curling club, the Granvenhurst Santa Claus Parade and the second annual Tyson Allan Cystic Fibrosis Fundraiser in partnership with the Gravenhurst Fire Department, to name a few.

This past summer, the store went viral after the McNaughtons posted a sign allowing customers to bring their pets into the store rather than leave them inside their cars while shopping during warm weather. The story gained the store’s Facebook page 6,700 “likes,” more than 1,300 “shares” and 751 comments.

Amanda Bell was an assistant editor of Hardware Retailing and NRHA. Amanda regularly visited with home improvement retailers across the country and attended industry events and seminars. She earned a degree in magazine journalism from Ball State University and has received honors for her work for Hardware Retailing from the Association of Marketing and Communication Professionals.
Previous Circular Saw Kit
Next Three Tips to Make Your Wholesale Market Trips More Profitable