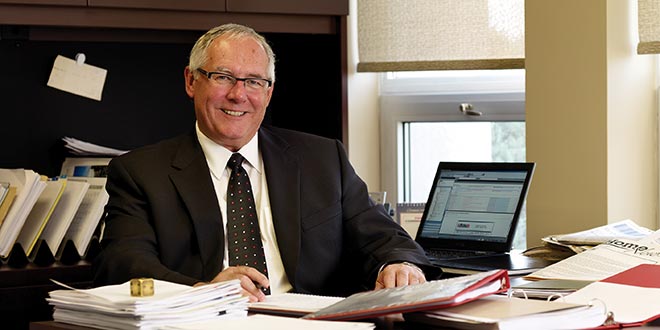 After nearly 50 years with the company, Home Hardware Stores Limited’s president and CEO, Terry Davis, has announced his plans for retirement later this year. As he prepares to step down, Davis will be helping transition the company to a new leader, acting in his current role as Home Hardware CEO until a successor has been found, according to a press release from the company.

Over the past several years, Davis has been instrumental in pushing forward a number of modernization efforts, including enhancing store branding, digitizing returns claims and advancing Home Hardware’s e-commerce capabilities with the launch of the company’s new website platform.

“It has been an honor and a privilege to serve our dealer-owners in many different capacities over my 48 years at Home Hardware,” Davis says in the release. “Home Hardware’s success is rooted in its unique dealer structure and a commitment to constant innovation, and that strong foundation will be equally important as we move into the next phase of our growth. While I am sad to leave an organization that has been an integral part of my life for nearly half a century, I am confident that we have laid a strong foundation—through developing new competencies in retail and digital, and the development of a new strategic roadmap—on which to build a very bright future. Now is an opportune time for the next generation of leadership to execute on that vision.”

Davis joined Home Hardware in 1970, starting as a junior warehouse employee in the distribution center in St. Jacobs, Ontario. He worked his way up through the company, taking on increasingly senior managerial and executive positions accountable for dealer support and dealer development, marketing, information technology, dealer finance and legal services, administration and strategic planning. He was promoted to executive vice president and chief operating officer in 2010, and he was named Home Hardware CEO in 2014.

According to an article from The Globe and Mail, Davis says Home Hardware is looking to help the new generation of homeowners who may not know as much about home improvement as their parents did.

“One of our strengths is that every one of our dealer-owners brings their strength and personality and makes it their own,” Davis says to The Globe and Mail. “I think in today’s environment, more than ever, people want to stand out as their own person… and I think the fact that our dealers are like that at a time when people are like that is a good match.”

The company has a leading executive search firm assisting in identifying qualified candidates for the role. Davis will remain in his position until the replacement has been found and fully transitioned into the role as Home Hardware CEO.

Renee Changnon is the retail outreach coordinator for NRHA. She meets with retailers in their stores and at industry events and introduces them to the services NRHA provides. Renee previously worked as a member of the NRHA communications team. She earned a degree in visual journalism from Illinois State University, where she served as the features editor for the school newspaper. After college, she implemented marketing and promotions initiatives at Jimmy John’s franchise locations across the country. She enjoys exploring books with her book club, Netflix marathons and hosting goat yoga at her apartment complex. Renee Changnon 317-275-9442 rchangnon@nrha.org
Previous Safety Lighting System
Next Lowe’s Announces New Leadership Structure