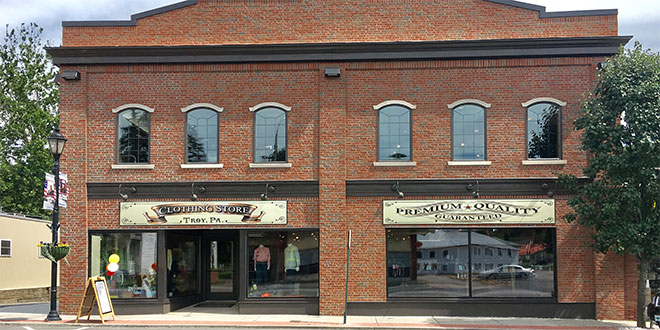 Hoover Hardware Do it Center Continues Its Growth Path

Rick Hoover’s family has been in the hardware business for more than 50 years, serving a small community of just over 1,200 people in Troy, Pennsylvania. The building where Hoover Hardware Do it Center currently resides has housed a hardware store since the 1890s. Hoover’s parents bought P.S. King Hardware in 1963, and Hoover joined the company in 1981.

The two-story building was a hardware store on the first floor and a gift shop on the second floor for a combined 6,000 square feet of salesfloor. Hoover says the combination of hardware and gift shops were common in rural areas at the time, serving the community with a variety of needs in one space.

Hoover Hardware had a growth spurt throughout the late 1980s and early 1990s.

“We had the opportunity to purchase two other storefronts on the same block,” Hoover says. “We opened up the building and brought all of our stock to the ground floor.”

At the time, malls were popular shopping destinations, and Hoover wanted to highlight the convenience of having everything on the same floor. It was at that time Hoover joined its current co-op and expanded into a home center and added a rental center after purchasing another neighboring building.

The growth didn’t stop there. In the early 2000s, a local lumberyard was going out of a business, and Hoover saw another opportunity.

“We decided to expand, and we are continuing to build our presence in the lumber business,” Hoover says.

Another unique opportunity came about as the clothing retail industry started shifting and malls were no longer traffic-drivers in the mid 2000s. The J.C. Penney department store closed in town, and the owner of the local clothing store decided to retire, which left a hole in Troy for clothing.

“We were sitting in a town with nothing as far as any clothing or opportunities other than some ag stores that sell some basic workwear and footwear,” Hoover says. “If you wanted a jacket, long underwear, socks, it wasn’t available. There was a void in town for clothing.”

The solution: expand into clothing on the second floor of Hoover Hardware Do it Center. The store worked with its co-op and other vendors to source brands that cater to tradeworkers and to stock some basic essentials. In 2009, the second floor was renovated to add a 3,000-square-foot clothing department, and it opened in the spring of 2010.

“We wanted to give it four or five years to see how it worked and really commit to it,” Hoover says. “It was received very well. We began to have some real traction. People were excited they could buy basic clothing in town.”

When word spread about the company’s ability to serve special needs for gasfield workers in the area, including fulfilling special orders and expanded sizing, another expansion was warranted. The space was extended to add 1,500 square feet of flame-retardant clothing and other specialized items for those workers. Hoover says it took research, but it was worth the investment.

“We did research on what could set us apart. When we brought in the men’s workwear lines, we weren’t afraid to get into large and tall sizes,” he says. “Word spread quickly. They knew they could get it in the store or we could order it for them.”

Click here to learn more about Hoover Hardware Do it Center’s commitment to the clothing category.

In 2015, after many successful years in that space, it was time to grow again.

An empty storefront which had housed another hardware store many years before sat just one block away from Hoover Hardware. The two-story building weighed on Hoover’s mind. After deliberating with his wife Cheri about what the building could become, Hoover bought it and began an extensive renovation process.

“The building had solid bones, but it needed a significant amount of work,” he says. “From the foundation to a new roof, updating the brick exterior and installing curved windows to match the rest of the town, it’s a complete overhaul.”

The inside saw a similar level of renovation, including installing an elevator and refurbishing the stairway to be up to code. The final building was 10,000 square feet on two floors, and Hoover and his wife Cheri knew exactly what it could be.

“We decided it would be perfect for a standalone clothing store,” Hoover says. “The next closest clothing store is at least 18 miles, and some of the more specialized stores are even further than that.” 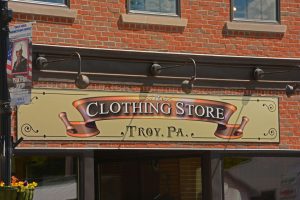 The Clothing Store opened in June 2017, and Hoover is consistently surprised at the reach the operation has outside the Troy city limits.

“We’re pleasantly surprised at how far people come to shop the store,” he says. “It’s really become a destination for certain people. It’s nice to see the standalone brick-and-mortar store making a comeback.”

Melanie is the communications and content manager for the North American Hardware and Paint Association. She joined the NHPA team in 2016 as an editor for Hardware Retailing and now helps lead the communications team to deliver relevant, timely content to the industry.
Previous Mastering Merchandising in the Clothing Department
Next Christmas Tree Stand