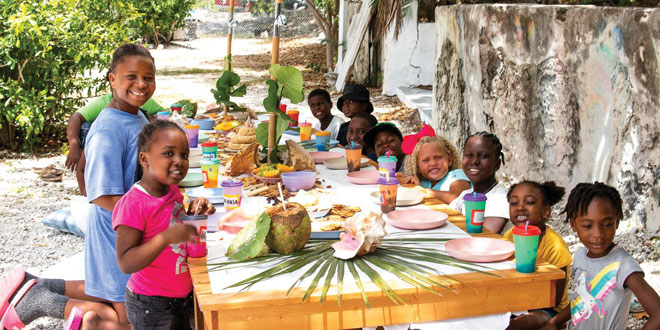 Known for providing an extra layer of customer service, independent home improvement retailers have always been in the business of helping customers. For generations, independent home improvement retailers have taken this idea a step further and found ways to give back to their communities and the customers they serve in personal and impressive ways. From donating to local nonprofit organizations to starting a summer camp for kids in the community, there are many levels of giving back, each impactful in its own way. Whether you already give back regularly or are looking for new ways to contribute, read on to discover the different ways retailers are supporting their communities.

Wrangling Customers Through the Rodeo

Penn Valley True Value owner Scott Gutierrez stays connected to his community by supporting local causes like the local chamber of commerce, Little League teams and more. His store is also a major sponsor of the Penn Valley Rodeo, located behind the store in Penn Valley, California. He says many of the farmers and ranchers in the area attend the rodeo, see how Penn Valley True Value is connected to the event and turn to the store when they need equipment and other supplies.

“To be able to tie yourself in with the community and give back, it comes back tenfold,” Gutierrez says. “Supporting the community has been a big focus since I’ve taken over the business. If you help the community, they are going to have your back too.”

The support goes both ways too; when the store hosts its anniversary sale, volunteers from the Penn Valley Rodeo Association cook hotdogs for the event.

“I don’t even need to ask them, they go down and pick up the food for us, and they cook it. It’s pretty neat to see the community working together,” Gutierrez says. “I feel strongly that tying yourself into the community is the best way to get your foot in the door with as many people as possible.”

An artist himself, Jon Wisthoff, store manager at Williston Ace Hardware & Flooring, wanted the residents of Williston, North Dakota, to have a place to purchase art supplies. He added the niche category to the store and came up with the idea to hold art classes in the store to promote the new art department. He posted signs about the classes in the store and customers immediately started showing interest. Wisthoff hosted the first class in 2017 and has been hosting around one class a month during the winter since then.

During the pandemic, Wisthoff had to put the classes on hold but was able to start them up again earlier this year. Typically, Wisthoff will have five to nine people per class, and some have been in almost every class since they started. The classes are open to all experience levels.

Wisthoff has been a painter since 2012, when he took his first painting lesson and fell in love with the medium. He had a long-time interest in art and did pottery, sculpting and carving before taking up oil painting. When he paints, he primarily focuses on landscapes, so that is what he teaches in the classes.

“Most of the subjects I paint are old, abandoned farmsteads close to where I live, so that is what we work on in class, focusing on everything from the sky to the buildings to water,” he says. “Each subject has its challenges, but it’s really fun to see how the paintings will vary between the artists and the style they put on the canvas.”

For 12 years, Curtis Lumber, which has 23 locations in New York and Vermont, has hosted PetAPalooza, an adoption event that has placed over 5,000 pets into loving homes since it began. The event finds homes for dogs, cats, bunnies, birds, farm animals, horses and reptiles.

The Curtis family has always been an advocate for abused, neglected and forgotten animals and started PetAPalooza in hopes of shedding light on adopting shelter pets in need, says marketing coordinator Jennifer Stickney.

“The Curtis’ have used the company’s name to help get the word out to the public to not only adopt shelter pets but also have pets spayed or neutered to avoid unwanted strays in our local communities,” she says.

PetAPalooza connects Curtis Lumber with pet lovers in each of the 23 communities where the company has stores. Local shelters and rescue groups can bring their adoptable pets to the event to interact with attendees.

“This informal setting really makes a difference in getting these pets adopted while the public enjoys a fun family day out,” Stickney says. “Pets are family, and there is no greater service we can provide than giving community members years of joy and love via their newly adopted furry friends.”

Keith Darville, owner of Darville Lumber Co. located in Exuma, Bahamas, recently started a summer camp for kids in the area with the help of his girlfriend, Haley Staples.

“Here in Exuma, local kids don’t have much to do during the summer, and a lot of parents don’t have the time or resources to occupy them,” Darville says. “I was talking with Haley about what we would do with our own kid over the summer; we came up with the idea of starting a summer camp, and it really snowballed from there.”

While other summer camps exist in the area, none last six weeks or are free to attend. When they decided they were going to create the camp, Darville and Staples reached out to a local foundation, which provided a building to serve as headquarters for the camp. Darville and Staples planned the camp in just two weeks, and when the 20 local kids, who ranged from ages six to 12, arrived on the first day, everything was ready.

The camp gave the kids an assortment of experiences, from learning how to swim to visiting a construction site to making pottery and other art projects. Campers were also able to visit a different island and go on nature trails where they learned about different plants and fish.

“A lot of the activities they did, they had never experienced before,” Darville says. “It was amazing how interested these kids were in everything. They just have such curious little minds.”

“The funds came out of my own pocket at first,” Darville says. “It wasn’t long before we had people reach out to volunteer, donate and offer to help with anything they could.”

Darville emailed all his customers to get the word out and credits the emails, Facebook and word of mouth for raising the awareness in the community that led to funding and support. He has also made an effort to be transparent in how donations have been used. He plans to release a financial statement along with lists of volunteers and donors.

Because the camp has such a long waiting list, a new batch of kids will be attending the camp next summer, but like before, only local kids will be qualified to attend.

“I think everyone should get a chance to attend,” Darville says. “Education should be fun.”

11 Ways to Give Back to Your Community

Carly joined the NHPA staff in 2021 as an associate editor. Born and raised in Indiana, Carly earned a B.A. in English from Indiana University Bloomington. She enjoys reading, hiking, and cheering on the Indiana Hoosiers.
Previous New Products – October 2022
Next Paint Insights From The Home Improvement Research Institute