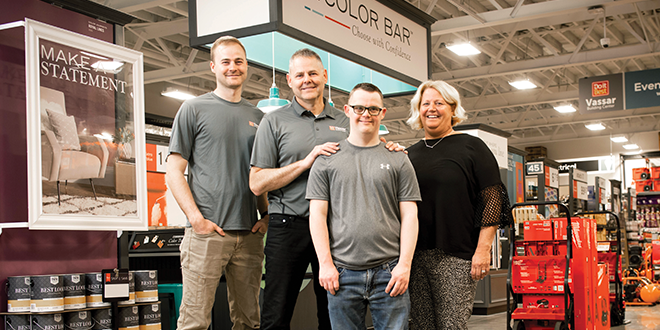 In October 2020, Mike MacKay stood beside his wife Brenda at the front doors of the newly relocated Vassar Building Center in Michigan. After more than a year of meticulous planning to design a new retail space, the MacKays were ready to cut the ribbon and safely welcome shoppers to their new location.

Mike had collaborated closely with Do it Best to build not just a new location for the business, but to create a space that celebrated Vassar’s shop local history and welcomed all shoppers while strengthening the Vassar Building Center brand.

On the following pages, learn how Mike worked with familiar faces to create an entirely new shopping experience for the Vassar community and along the way found new opportunities to strengthen the Vassar Building Center brand.

“We always felt our previous location didn’t reflect who we are as a company,” Mike says. “We always thought somehow, some way, we’re going to get a building that reflects us.”

Choosing Growth
Mike and his team had been considering expanding the business for years, but the perfect space and the perfect time to move never aligned.

“We’d been talking about adding on to our existing store for a long time, but every way we looked, we never came up with a solid plan to get the space we needed,” Mike says.

When a nearby discount store and former Ford dealership went out of business, Mike and Brenda were immediately interested in the property. First the pair considered it as a storage space for bulkier inventory, but later came to see it as a great prospect for expanding their footprint.

“One day, we were talking, and we realized that our old building was holding us back,” Mike says. “It was preventing us from getting into new categories and expanding the product mix we already had.”

As the MacKays began planning their expansion, their co-op, Do it Best, inquired whether they’d be interested in expanding into a new type of store for the company, a prototype home improvement center that drew inspiration from consumer-focused national retail chains.

Do it Best collaborated with a design firm to plan the new prototype. The new store model would prioritize the shopper experience with wider aisles, additional lighting and bold graphics on the building’s exteriors. Its goal would be to uphold what traditional DIY customers loved about their local home improvement center while creating a shopping space focused on customer satisfaction that enticed other shoppers as well.

“The design team really wanted to highlight our local history,” Mike says. “They asked for historical photos of the business—people who used to work here, the trucks they drove.”

Those mementos were transformed into striking details that highlight the history of the company and serve as a reminder the Vassar brand has been serving the community for more than 50 years.

An Inside Job
As the MacKays began planning their new retail space in late 2019, they soon realized a familiar face was there to help them along.

Years before, Mike had hired a fresh college graduate named Cherié Jacobs (then Swaffer). She worked in the business for a short time, making a name for herself as a creative team member who offered Mike exterior painting and design suggestions to beautify the building.

She left the company, and years later, Mike met her again in her new role: as a member of the Do it Best retail store design team.

As a former Vassar Building Center employee and current Do it Best team member, Cherié saw the project from two angles: understanding what the MacKays wanted to preserve from their old structure and fulfilling Do it Best’s goal to modernize the home improvement shopping experience.

“It was so easy to talk to her,” Mike says. “Our previous connection with her was an advantage. We both felt comfortable with one another and focused on the project.”

As the final pieces of the design puzzle fell into place, construction began to renovate the former discount store into the new Vassar building.

A Bigger Brand
Construction on the new Vassar location began in November 2019 and was almost immediately stalled by complications from COVID-19.

Mike credits the construction crews and the Do it Best design team for keeping the project on track through a range of obstacles, including supply chain disruptions and social distancing.

In the end, Mike and his team nearly doubled their existing footprint. The new retail space measures roughly 20,000 square feet, and the company was able to double—in some cases even triple—the space for certain departments.

The previous location had a kitchen design center, but its footprint tripled at the new location, better able to show customers potential projects, design mock-ups and hold consultations.

Mike was also able to bring in more products to satisfy customers, expanding his selection of popular grills and workwear specifically.

Mike also reconsidered how his business merchandised endcaps. Previously, his endcaps were promotional, focused on a single product at a great price. At the new location, Mike says the endcaps are closer to “storytelling,” highlighting specific projects and offering a suite of products to accomplish them.

Besides the enhancements to the physical space, Mike and his team quickly discovered a new opportunity afforded at the new location: a chance to strengthen their brand recognition in the community.

As the new location drove word of mouth in the community, Mike slowly noticed his customer demographics begin to shift.

“The first thing we noticed was more female shoppers, then couples,” Mike says. “Before, you’d see men shopping the store alone, you’d never see couples, but that all changed at the new store.”

Mike says he knew the company had succeeded in reinforcing its brand when the holiday sales season arrived. Previously, his customers visited the former location for a single product or the materials for a one-off project.

“Right around Christmas, we started to notice people were truly shopping the store,” he says. “At the new location, people aren’t focused on getting a single product, they want to look around and discover something new.”

One customer told Mike he did all his Christmas shopping at Vassar Building Center, finding gifts for his wife and two sons in a single trip.

“It’s nice that our customers don’t have to leave the community to get big brands,” Mike says.

A New Chapter
Mike says the initial reaction to the building has been extremely positive.

“People come in and their jaws drop,” he says.

The company hosted a subdued opening ceremony to accommodate COVID-19 safety protocols, but are currently planning for a bigger celebration in the near future.

“After the ribbon cutting, the building felt like our own,” he says. “Once we were done for the day, we shut the lights off, closed the doors and thought, ‘This is really ours.’”

Todd is trends editor for Hardware Retailing magazine. He graduated from Indiana University where he majored in journalism and French. Throughout his career, he has aimed to highlight small businesses and their community value. He joined NRHA in 2017.
Previous U.S. Small Businesses Offered Tax Credit to Offset Vaccine Costs
Next How NHPA Can Help You Create an Effective Training Program 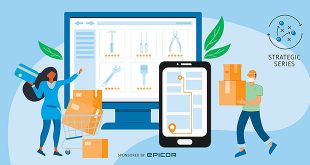 The past 18 months have challenged every retailer to adapt to new customer demands, shifting …