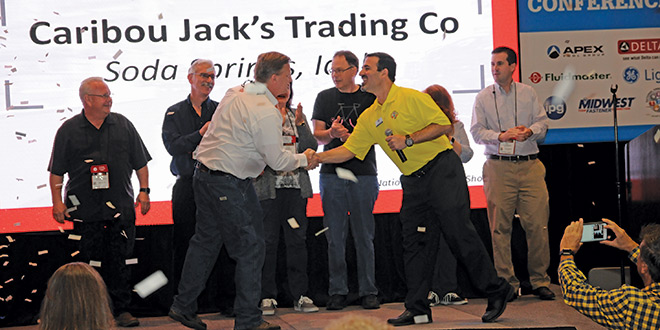 Click the image above to view a full PDF.

From Dream to Reality

For one Idaho retailer, betting big in Las Vegas paid off.

A few months earlier, Lau submitted an essay to the National Hardware Show’s Reimagine Retail program, detailing how he’d spend the program’s $100,000 to improve his business. Lau proposed building a farm-to-table restaurant in his home improvement and sporting goods store, wagering that combining the grilling and farming communities in his rural market would be a smart bet that could raise revenue and transform his company’s brand.

Playing to His Strengths
Lau says consumables weren’t always a big part of Caribou Jack’s product offering, but after buying the store in 2010 and adding inexpensive and fast-moving impulse items near the cash register, he saw the category’s potential. Soon, Lau started stocking sauces, marinades and rubs, displaying them next to new grills. By 2014, he was beginning to wonder how he could introduce a full restaurant into his operation.

“I sell as much in barbecue products as I do in lawn and garden supplies,” Lau says. “It’s probably my third- or fourth-largest category and my No. 1 selling product brand features wood-fired grills and smokers.”

Without reducing the importance of his core home improvement categories, Lau’s winning submission reimagined Caribou Jack’s as a community gathering point, a place where DIYers could collect everything they needed for a weekend project, contractors could make large-scale inventory orders and a farm-to-table restaurant would serve everyone delicious, locally sourced fare.

Lau’s timing couldn’t be better. The American Culinary Federation recently surveyed 700 of its members to learn what those chefs saw as the top food trends of 2018. Hyper-local food topped the list, thanks to the fact that many customers see locally sourced produce and meats as a delicious guarantee of quality.

Building a Dream
After winning, Lau and the Caribou Jack’s team began working to make their dream a reality. The first step was constructing a storage shed Lau calls The Barn that could withstand brutal Idaho winters, while keeping inventory safe and dry. Building The Barn would clear space within Caribou Jack’s for the restaurant. To make it all work, Lau and his team needed to totally reset the store, moving nearly every department in the process.

“Resetting a store is no fun. It’s hard work for everyone, and we’re a small store, but it was totally necessary. Now the store flows better, but it took a lot of manpower to get it done,” Lau says.

When he purchased Caribou Jack’s in 2010, Lau became the sixth owner since the business began as Gagon Lumber in 1870.  His roots in the community run deep; his great-great-grandfather helped settle the town nearly a century ago. Even with a sudden influx of cash, Lau wanted to stick close to the business’s history as he redesigned the store.

“When I started my designs, I wanted to highlight the types of architecture my ancestors would have built,” Lau says. “At the same time, I wanted to create a modern feel. It has some modern features, but it’s still very true to its roots in Soda Springs. We worked with PPG Paints to choose historically accurate colors for the interior, too.”

Construction hit a small snag in late August 2017. Lau’s concrete supplier sent a mix intended for outdoor use to serve as the foundation of The Barn. Within hours of being poured, small holes rippled throughout the foundation, but Lau says the concrete company was quick to correct the problem. He believes the issue taught him and his team the importance of clear communication every step of the way.

According to Lau, the biggest challenge in the journey to make his business dream a reality is ensuring he sticks to his budget.

“It sounds ludicrous, but $100,000 doesn’t go as far as you think when you’re building a restaurant,” Lau says. “My biggest obstacle is figuring out how to effectively manage those dollars.”

To save money, Lau, his sons, their friends and the Caribou Jack’s team are completing as much of the construction work as they safely can. By December, Lau and his crew were jackhammering concrete after the last customers of the day had left, clearing space for plumbers to install the components to run a restaurant within the building. He’s working in tandem with the Caribou County health department to make sure his new venture is up to code.

“After that, we have some walls to build to divide the kitchen from the actual store,” Lau says. “The flow will be similar to a Subway restaurant. You’ll come in and make your order in one section, then move along and add toppings along the way,” Lau says. 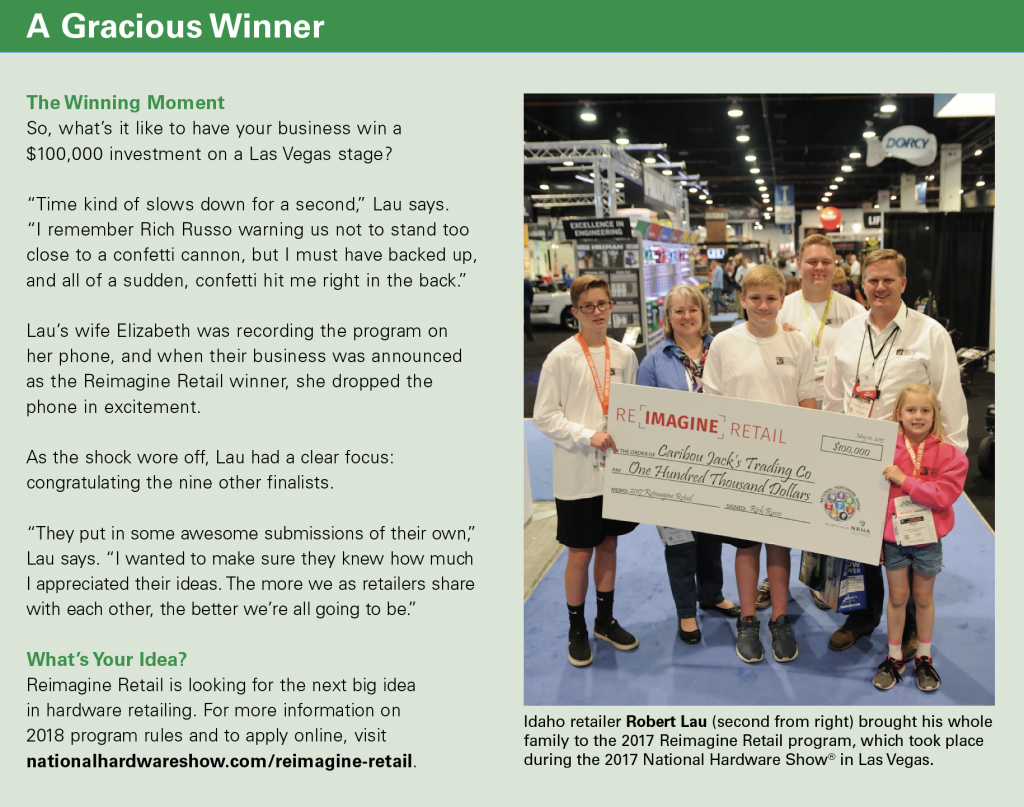 Lau says the still-unnamed cafe will smoke beef, pork, turkey and chicken each day. He’ll serve as head chef, shredding the meat and offering it as sandwiches, with salads or on baked potatoes with a selection of sides like macaroni and cheese. He’ll use locally sourced ingredients and hopes to grow his own produce on-site within the next three years.

In the first weeks of 2018, the store was ready for electricians and plumbers to start their work. Lau hopes the restaurant will have its grand opening in early April to coincide with warm weather and the start of the grilling season. He plans to invite all the vendors and workers who helped make his Reimagine Retail dream possible. 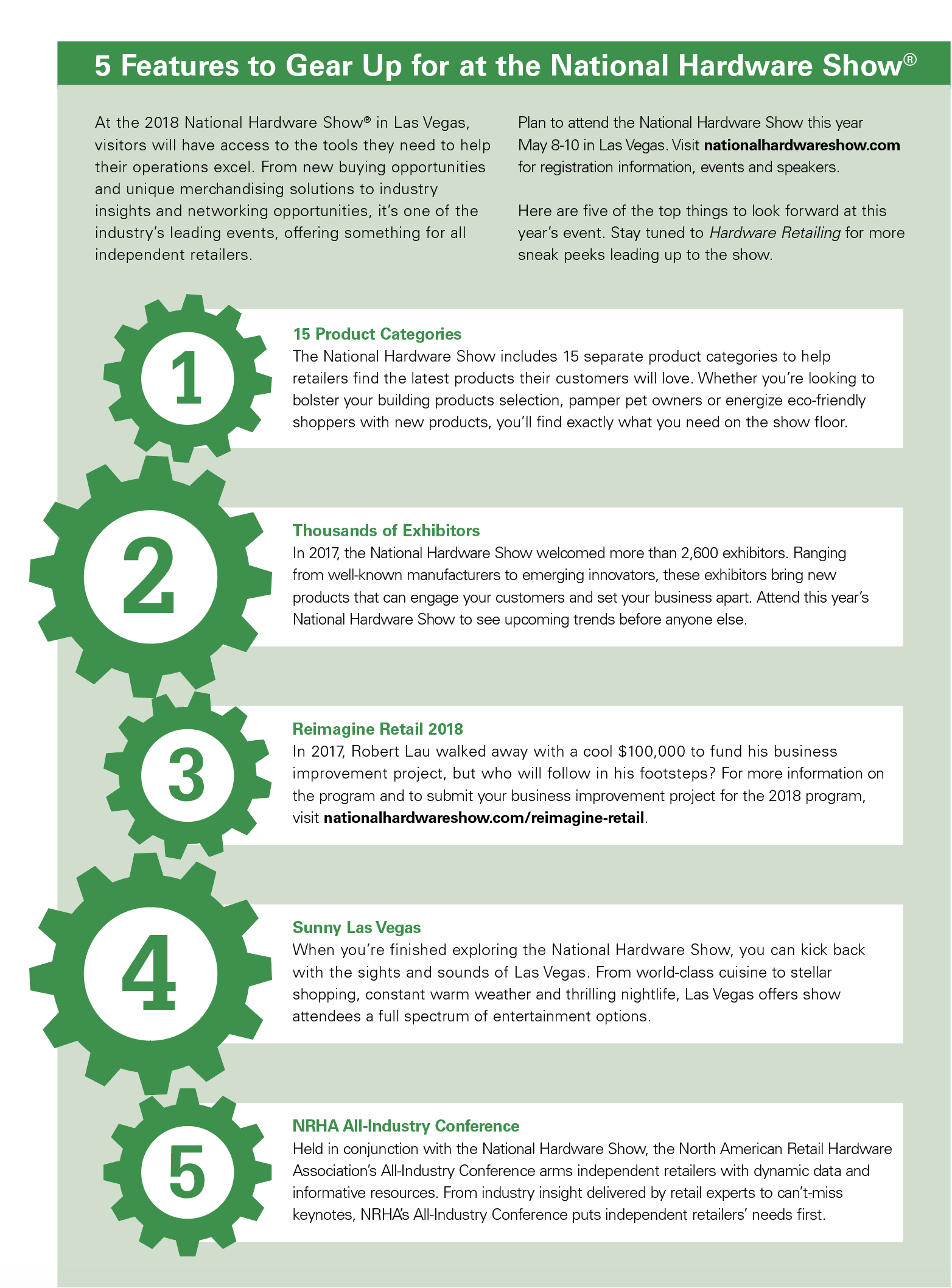 Getting Out of the Rut
Even with a few construction challenges, Lau hasn’t lost focus of his goal of establishing Caribou Jack’s as a one-of-a-kind retail destination.

“Trends are now suggesting that maybe buying things online isn’t going to be the only path forward, especially with studies showing millennials want brick-and-mortar experiences,” Lau says. “As retailers, we have to get out of our ruts and try new things: new merchandising, new types of events to get people to visit our stores. That’s where I’m putting my money.”

“They bought an upscale pizza chain,” Lau explains. “When people asked why they bought it, they said it’s the same demographic they already serve. By trying something new, they think they can create a deeper relationship with their customers, and I think that’s absolutely true.”

Lau’s original Reimagine Retail submission also included the creation of a Caribou Jack’s smartphone app that would allow customers to book the restaurant for parties and community meetings. Lau says the construction phase has temporarily diverted his attention from the app, but he plans to return to it after the cafe opens.

Lau says he hopes the winner of this year’s Reimagine Retail will be ready to hit the ground running.

“Hopefully whoever wins in 2018 is in the same boat I was,” Lau says. “I hope it’s someone who has a vision and a goal, but just hasn’t found a way to get there.”

Todd is trends editor for Hardware Retailing magazine. He graduated from Indiana University where he majored in journalism and French. Throughout his career, he has aimed to highlight small businesses and their community value. He joined NRHA in 2017.
Previous At-Home Saunas
Next Retailers Find Value in Relationships That Defy Expectations 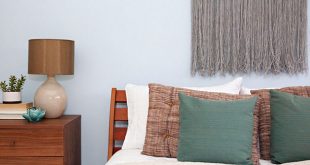