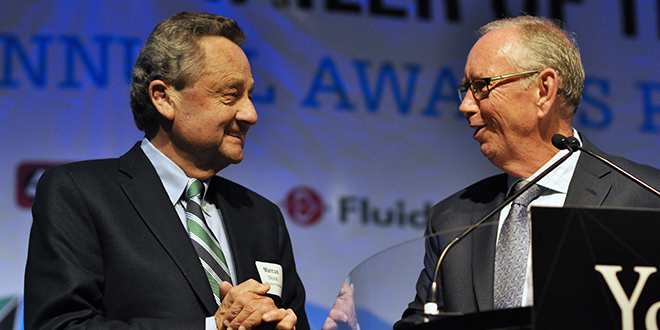 Marcus Moran Jr. (left), former CEO of Aubuchon Hardware, was a philanthropist and a supporter of many industry initiatives.

Moran’s home improvement legacy began in 1970, when he started his career at Aubuchon Hardware, the business his grandfather founded. Throughout his tenure with the company, he served as personnel manager, treasurer, president and CEO. He retired in 2017 as Aubuchon’s vice chairman of acquisitions.

“Our industry has lost a great champion,” says Bob Cutter, president and CEO of the North American Retail Hardware Association (NRHA). “Marcus was instrumental in encouraging us to launch the NRHA Retail Management Certification Program back in 2013, and he supported it by not only sending students through the program, but by being a course instructor up until last year. He selflessly shared his knowledge and years of experience with students because he knew that for independent retailers to thrive, we all need to work together and learn from each other.”

Throughout his life, Moran was an advocate for several charitable organizations. He held trusteeships at his alma mater Nichols College and other educational institutions. For 29 years, he served on the board of IC Federal Credit Union, including ten years as its chairman. He was also the former president and director of his local Boys and Girls Club.

Marcus is survived by Tonia, his wife of 52 years, and their three children and six grandchildren.

Todd is trends editor for Hardware Retailing magazine. He graduated from Indiana University where he majored in journalism and French. Throughout his career, he has aimed to highlight small businesses and their community value. He joined NRHA in 2017.
Previous Heat Gun
Next Soil Probiotic