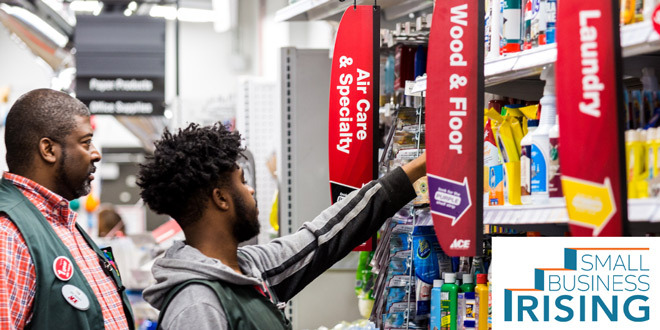 A new coalition of independent businesses is urging policymakers to rein in monopolies and level the playing field that has long left independents at a competitive disadvantage.

Called Small Business Rising, the coalition includes a broad and diverse cross-section of business owners and entrepreneurs from all corners of the country who are united around a common goal: breaking up monopoly power to safeguard the right of small businesses to compete and serve the needs of their communities.

For the first time, small and independent businesses are adding their voices to the growing chorus calling for changes to federal policies that have allowed monopolies like Amazon to amass outsized power and influence.

“Concentrated market power is the single biggest threat facing independent businesses,” says Stacy Mitchell, co-director of the Institute for Local Self-Reliance (ILSR). “Every day, we lose more small businesses because of the abusive and anticompetitive tactics of Amazon and other monopolies. This campaign gives America’s entrepreneurs a platform to stand up and call on policymakers to check monopoly power and reinvigorate the antitrust laws.”

Mitchell was previously a guest on Episode 32 of the “Taking Care of Business” podcast where she discussed ILSR’s mission and objectives.

Small Business Rising is asking policymakers to build an economy that is more prosperous, equitable, and innovative by leveling the playing field. The campaign is calling on policymakers to:

“With talk from both sides of the political aisle professing to support small businesses, it is time we push for small business-friendly legislation and the enforcement of existing laws designed to promote business fairness,” says Dan Tratensek, chief operations officer of NHPA. “We are asking all of you—hardware, home improvement, lumber, paint and decorating retailers—to join us in these efforts.”

“We can’t let this momentum wane. I know independent home improvement retailers will not shy away from a fight, we just want to make sure it is a fair one,” Tratensek says.

“Each year that Amazon has grown, my business has shrunk. I want Congress to enforce the antitrust laws that exist, enact stronger ones and give us at least a level playing field as we move into a post-COVID world,” says Gina Schaefer of A Few Cool Hardware Stores.

How You Can Help

Earlier this year, these organizations collaborated on a joint letter to President Joe Biden urging the administration to prioritize antitrust efforts, and they hosted an antimonopoly town hall that featured Rep. David Cicilline (D-RI) and drew nearly 400 business owners.

Small Business Rising will build on this momentum. By telling their stories, independent businesses will help policymakers understand how failed antitrust policies are harming their industries and communities and the urgent need for policymakers to act.

For independent home improvement operators who want to get more involved in Small Business Rising’s objectives, you can download a free media kit full of graphics, prepared social media posts and more information on how monopolies harm independents.

Todd is trends editor for Hardware Retailing magazine. He graduated from Indiana University where he majored in journalism and French. Throughout his career, he has aimed to highlight small businesses and their community value. He joined NRHA in 2017.
Previous Hot Products – April 7, 2021
Next Register Now: Learn to Lead Diverse Teams