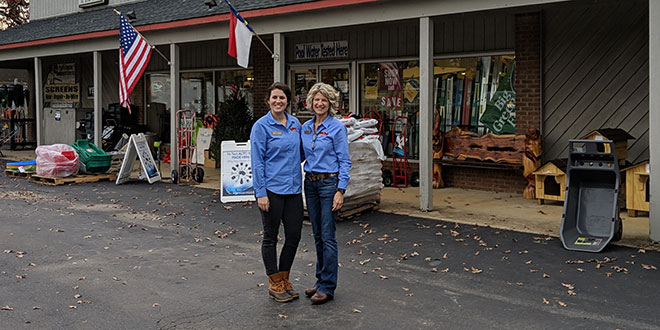 Indian Trail Hardware has been a reliable family business for locals to turn to in Indian Trail, North Carolina, and surrounding communities for decades.

Owned and operated by Bill and Mae Workman since 1984, the store was only 4,000 square feet and has tripled in size over the years, according to Karen Wingo, daughter of the Workman’s and the second generation owner to lead the business.

“In 1999, my dad retired and I started working at the store,” Wingo says. “A year later, I bought the store. My mom still works at the store part-time, and recently, my daughter Hanna joined the family business as the store manager. It’s very special getting to work with my mom and daughter in the store.”

About a year and a half ago, Hanna joined the operation, which has helped breathe new life and vision into Indian Trail Hardware, Wingo says.

“Hanna and I think a lot alike and are both hard workers,” Wingo says. “We have tried many new things this year to drive more business to the store, and I attribute our success in marketing to her.”

Since summer, Wingo says they have hosted several pop-up shop opportunities at the store on one Saturday of the month. The purpose of the event is to encourage customers to shop locally. Indian Trail Hardware invites local artists to the store, where they can set up a tent and can sell items they make, from candles and soaps to stained glass, jewelry and pottery.

During Small Business Saturday, Wingo says they gave shoppers coupons that they could use at the store the following weekend for the Christmas Pop Up Market.

The most recent event at the store was the Christmas Pop Up Market, which ran from 9 a.m. until 2 p.m. on Dec. 1. According to Wingo, the event not only helps draw attention to local artisans but also to the hardware store, making it a win-win situation for them both.

As the mother-daughter team looks toward the future, Wingo says she’s excited for all of the great ideas Hanna brings to the table for them to roll out, encouraging both new and loyal customers to shop locally at Indian Trail Hardware.

“Hanna gets me excited about the business, and that passion has helped breathe new life into the operation,” Wingo says. “We make a pretty good team.”

Renee Changnon is the retail outreach coordinator for NRHA. She meets with retailers in their stores and at industry events and introduces them to the services NRHA provides. Renee previously worked as a member of the NRHA communications team. She earned a degree in visual journalism from Illinois State University, where she served as the features editor for the school newspaper. After college, she implemented marketing and promotions initiatives at Jimmy John’s franchise locations across the country. She enjoys exploring books with her book club, Netflix marathons and hosting goat yoga at her apartment complex. Renee Changnon 317-275-9442 rchangnon@nrha.org
Previous Retailer Honored With Spirit of Independents Award
Next Multimaterial Bonding Agent