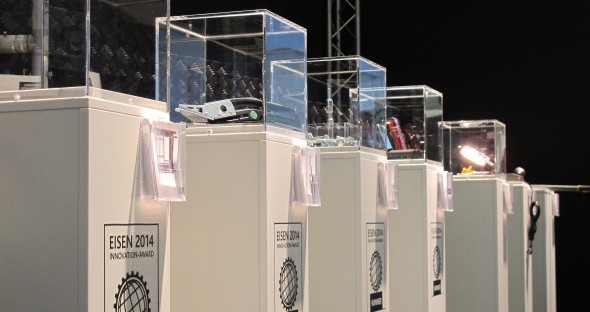 Attendance momentum continued to grow as the International Hardware Fair began its second day this morning in Cologne, Germany (with an estimated 55,000 people scheduled to attend). The theme of the day was clear to all who came—innovation.

From the second attendees walked into the Cologne Convention Center, they were greeted by the Eisen 2014 Innovation Awards display, a slate of seminar programming to promote savvy global business practices and five halls of new products and prototypes.

With more than 90 American manufacturers in attendance, the show not only created a unique space for one-on-one networking between domestic retailers and vendors but also an opportunity for U.S. manufacturers to strengthen their brand reach.

“This is our second year back at the show, and we’re using the opportunity to work on growing and strengthening our brand globally,” says Bruce Ancona, managing director of Blackfire, a flashlight and sporting goods company based in New York. “Networking with key retailers and distributors will be main objectives for us today. It’s a great show because we get to introduce all kinds of new innovation to a broad range of attendees.”

For American retailers in attendance, the breadth of the show proved to be its true value-add.

One of the biggest topics of the day was the announcement of winners of several awards including the Innovation awards, product of the year award and the first-ever customer service award.

Attendees found particular interest in the much-anticipated EISEN Innovation awards, which included 13 initial nominees of more than 80 entries. Six of the companies were eventually named winners with products ranging from high-tech measuring devices to newly designed bolt cutters with a focus on ergonomic improvements. (For a full list of winners visit www.eisenwarenmesse.com)

Other trends which proved to be at the forefront of several U.S. attendees included finding solutions to impending legislation, most notably in the plumbing category, and finding niches that would help strengthen their differentiation strategies back in the States.

“We do a lot in the auto industry and this show has a really broad appeal; it’s a really different kind of event and offers me access to a lot of different opportunities,” Buchheit says.

Be sure to check back tomorrow where Hardware Retailing will continue the live coverage of the International Hardware Show in Cologne, Germany and reveal one of the biggest trends we found at the show and discuss the implications it could have on the future of the home improvement industry.

Jaime Koch was the managing editor of Hardware Retailing Magazine. Jaime regularly traveled around the country and internationally to visit with retailers and share their stories. Jaime was honored by the American Society of Business Publishers for Editorial Excellence.
Previous Retail Employment Down 6,700 in February
Next The Dawn of a New Day for Independents