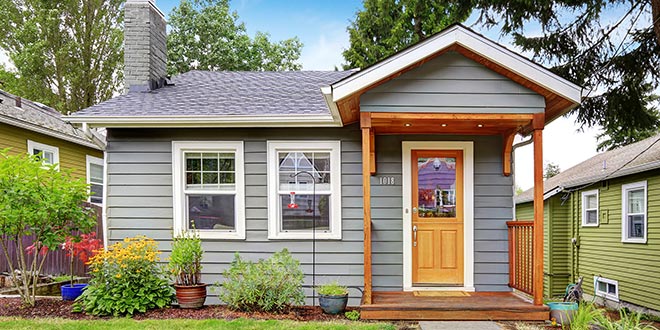 If you’ve watched home design shows or you’ve browsed through Pinterest much, you may have seen examples of the homes attracting varying types of homeowners to the tiny house movement.

According to The Tiny Life, a resource for people seeking information on tiny living, the tiny house movement is a social movement where people choose to downsize — drastically — the space where they live. And these homeowners are building or buying houses that can be as small as recreational vehicles.

Concept behind the tiny house movement resonates with people looking to cut back on expenses and downsize, but one of the biggest challenges for homeowners looking to live in a dramatically smaller-than-average footprint is finding a location where tiny homes are allowed.

Building codes in most municipalities set a minimum size for dwellings, according to U.S. News & World Report. And while building larger homes is still mainstream, the interest in tiny homes is growing because of the financial flexibility they provide.

“The small house movement takes in people with a variety of motivations: young people who want to get out from under student loan debt, people who wanted to have less impact on the environment, people who can’t afford more and older people who seek to downsize in retirement,” the U.S. News & World Report article says.

Rudy Rivas, a custom home builder in North Texas, has a wide range of work in his portfolio, including big sprawling homes on one end of the spectrum. He is currently working on his first tiny house, which is about 180 square feet. Quite a few homes that size could fit inside one of the big houses Rivas builds, according to The Dallas Morning News. The cost to construct the tiny home will start at $40,000.

“It’s going to have something of a whimsical design– sort of Harry Potter-looking,” Rivas told The Dallas Morning News. “The kitchen will be fully functional with a stove and fridge. The bathroom will have a shower and standard commode– it’s not going to be airline or RV sized.”

The tiny home movement is not reflected in major housing trends in the U.S. In fact, Rose Quint, a researcher for the National Association of Home Builders, finds the fad surprising, the article says. Fewer than 3 percent of homes built in 2015 in the U.S. were smaller than 1,200 square feet, Quint says.

“It’s very creative what they are doing, but it’s not related to what we are seeing in the overall market,” she says.

Renee Changnon is the retail outreach coordinator for NRHA. She meets with retailers in their stores and at industry events and introduces them to the services NRHA provides. Renee previously worked as a member of the NRHA communications team. She earned a degree in visual journalism from Illinois State University, where she served as the features editor for the school newspaper. After college, she implemented marketing and promotions initiatives at Jimmy John’s franchise locations across the country. She enjoys exploring books with her book club, Netflix marathons and hosting goat yoga at her apartment complex. Renee Changnon 317-275-9442 rchangnon@nrha.org
Previous Hardware Stores Seeing Housewares Sales increase
Next Energy Efficiency Tax Credits for 2016