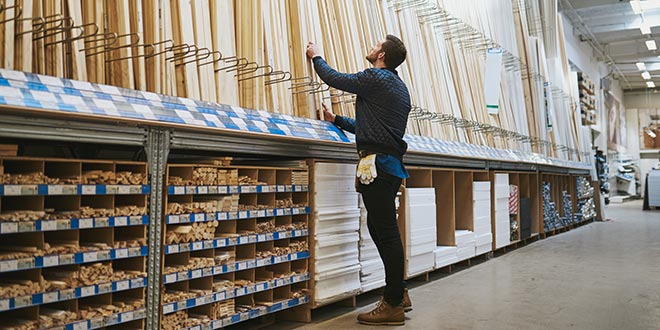 Sales at U.S. home improvement stores (NAICS 444) in June rose 17 percent over the same period in 2019, new data from the U.S. Census Bureau shows. Overall U.S. retail sales climbed 7.5 percent over May as many businesses reopened doors and returned to serving customers.

Data shows home improvement sales fell slightly from May, but year-to-date sales for the retail sector are up 9.9 percent from 2019.

U.S. retail overall totaled more than $524 billion in June, up from $487 billion in May. June sales at clothing stores were more than 105 percent higher than in the previous month, while furniture and electronics stores also saw sharp rises in consumer spending.

Nonstore retailers, a category which includes Amazon, saw a 2.4 percent drop in sales from May after strong consumer spending in April and May during early stay-at-home orders. Overall sales for the category are up nearly 24 percent from June 2019.

Though retail sales were high in June, some economists worry future spending could drop as COVID-19 cases rise in many states and certain unemployment benefits are due to expire by the end of July.

Todd is trends editor for Hardware Retailing magazine. He graduated from Indiana University where he majored in journalism and French. Throughout his career, he has aimed to highlight small businesses and their community value. He joined NRHA in 2017.
Previous Drywall Level
Next 4 De-escalation Strategies for Retail Workers