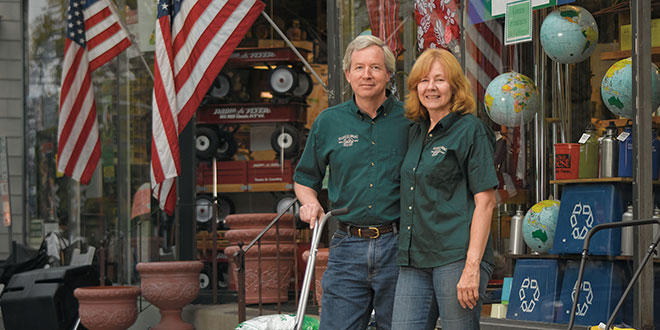 For residents of Katonah, New York, a trip downtown is like stepping back in time.

Nestled in the downtown area is a store that mixes nostalgia with new innovations. That business is Kelloggs & Lawrence, which began as a hardware store in the 1800s and remains a must-visit spot for area residents.

Whether a customer is looking for fireplace accessories, outdoor apparel or they just need to fix a leaky pipe, Kelloggs & Lawrence can help.

A Rich History Leads to a Bright Future

Shortly after Kellogg took over the business, nearby New York City needed a reservoir system to supply it with water. Part of the project included flooding Katonah’s original location in the 1890s. To preserve the town, a group of about 55 local families “hoisted their houses up on logs and with the aid of horses, rolled them a mile south to safer ground,” according to The New York Times.

When the town relocated, the hardware store moved, too. A new building was constructed in 1895 and that location has been the site of the current business ever since. The store has had some name changes over time, but was eventually named Kelloggs & Lawrence in the early 1900s.

Nonrelatives now own the business, but the Kellogg family is still involved. Currently, Jeff Kellogg is general manager and represents the fourth generation to work in the store.

While growing up near Katonah, current owner Bart Tyler dreamed of one day owning and operating Kelloggs & Lawrence. So when the opportunity to purchase the business presented itself in 1996, he jumped at it. He left his previous career of 20 years and had no retail experience, but he was eager to get to work in hardware.

“In my previous career, I was obligated to travel a lot,” Bart says. “Running this business provides so many rewards. It’s a pleasure to operate a local business in the community in which I live in.”

Bart and his wife Diana now operate the business together. Their distinct personalities and character traits complement each other, and help the business run smoothly, Diana says.

Diana has a passion for the people side of the operation and for growing product categories such as outdoor apparel and giftware.

“I have a very analytical business background and she has more of a home-making and community volunteer background,” Bart says. “So we each naturally handle different parts of the business that require our attention. Also, the diversity of hardware and the diversity we’ve created beyond hardware has been great. We are both able to be involved, but not get in each other’s way.”

Diana and Bart aren’t related to the early Kelloggs & Lawrence owners, but working alongside Jeff Kellogg has been valuable. The couple relies on his strengths in the lawn and garden and plumbing categories. They also appreciate his overall knowledge of the industry and the store’s history.

“Jeff has worked in the store since he was 14,” Bart says. “He has a huge body of knowledge in hardware and hardware history.”

When a customer first visits Kelloggs & Lawrence, they initially see the building, which has the same Victorian look as when it was first constructed, Diana says.

In the 1960s, the store went through a remodel. The then-owners stripped the original store interior, replacing wooden fixtures with a modern sales floor setup. The store then featured modern gondolas and tile floors.

The outside of Kelloggs & Lawrence kept its historic look, but Bart and Diana wanted to turn back time on the inside, too.

“Our notion of a traditional hardware store consisted of the charm of stores from the 19th century,” Bart says. “To us, it should feature wood counters, various sundries. When people used to walk into the building, they expected to find that. We wanted to restore it.”

To do that, Bart and Diana went to an older store a few miles away that was closing. They got original materials from that store, and found more item from a dozen other old hardware stores.

“Once again, the store has the traditional wooden case that runs floor to ceiling,” Bart says. “We also have a cash shuttle, which is a device with a series of wires that runs across the ceiling. You pull a cord and send money to the back office. We frequently show it off to our customers.”

Though the business has returned to a historic appearance, the popular products are modern, unique and fun, Diana says.

“After we realized we had maximized the sales potential of the hardware side of the business, we knew we needed to augment our basic hardline with new departments,” Diana says. “Over the years, clothing has become an important part of the business for us. We have taken up products from The North Face and other outdoor brands, which is a big draw for customers.”

The fireplace category is a prominent destination in the store. Plus, it features a significant gift department, Bart says.

“We had a passion for fireplaces before we bought the store,” he says. “After buying a hunting lodge-style home, we had fun picking out fireplace doors, tools and more. We got in the business because there was no fireplace shop around us. Now we have become a fireplace destination where designers, architects and homeowners know they can find high-quality products.”

The business has a loyal customer base and a long-standing relationship with its community.

“This store, even before Diana and I came on board, had a strong tradition of community involvement,” Bart says. “Kelloggs & Lawrence supports several community organizations. We donate to fundraisers. And we employ local high school students who work at the store after school is out.”

And just as community members are proud Katonah still stands, they are also proud of the old hardware store.

“Everybody is very proud that the long traditions of our town, including this business, still exist,” Diana says. “For me, I truly enjoy my customers and I love what I do. The team of people we work with and our customers—they’re our people.”

Renee Changnon is the retail outreach coordinator for NRHA. She meets with retailers in their stores and at industry events and introduces them to the services NRHA provides. Renee previously worked as a member of the NRHA communications team. She earned a degree in visual journalism from Illinois State University, where she served as the features editor for the school newspaper. After college, she implemented marketing and promotions initiatives at Jimmy John’s franchise locations across the country. She enjoys exploring books with her book club, Netflix marathons and hosting goat yoga at her apartment complex. Renee Changnon 317-275-9442 rchangnon@nrha.org
Previous The Personal Side of Selling Your Business
Next J.C. Penney CEO Learned From Home Depot