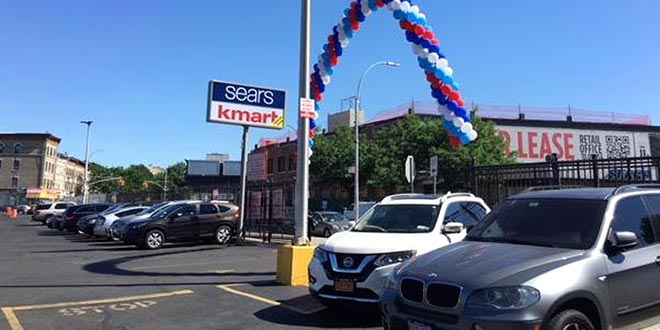 Combined Kmart-Sears Store Is a New Venture for Sears Holdings

Sears Holdings is experimenting with a Kmart and Sears combination store, even as it closes dozens of individually branded stores throughout the U.S.

The company recently opened a Kmart store inside of a Brooklyn, New York, Sears location, according to CNBC.

“The goal is for the Brooklyn combo store to become a one-stop shop, similar to a CVS or a Walmart, selling a wider range of items,” CNBC reports.

CNBC describes the store as a 10,000-square-foot “convenience shop” that sells consumable products such as mouthwash, dish soap and food.

Sears chose to test the combination store in New York as part of a “focus on our best stores,” a company spokesperson tells CNBC. “It’s a market where we have a long history.”

Sears Holdings has been trying to fight dipping sales and return to profitability after years of steady decline.

The company, which owns both Sears and Kmart, has closed hundreds of underperforming stores to cut costs and attempted to sell assets, including its Kenmore appliance brand.

A spinoff business, Sears Hometown and Outlet Stores, has also announced that it will close up to 100 of its stores.  Sears Holdings does not own Sears Hometown, which is a separate publicly traded company, according to filings with the U.S. Securities and Exchange Commission.

Kate is profiles editor for Hardware Retailing magazine. She reports on news and industry events and writes about retailers' unique contributions to the independent home improvement sector. She graduated from Cedarville University in her home state of Ohio, where she earned a bachelor's degree in English and minored in creative writing. She loves being an aunt, teaching writing to kids, running, reading, farm living and, as Walt Whitman says, traveling the open road, “healthy, free, the world before me.”
Previous Dollar General Pilots App for Mobile Checkout
Next Iowa Couple Follows Dreams and Reopens Akron Lumber Company