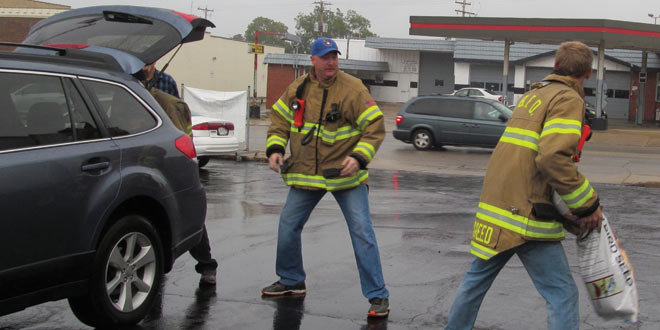 Birdseed and fire prevention typically don’t have much in common. But for one weekend in October at Reineman’s True Value in Burlington, Wisconsin, the two categories worked side by side at the store’s annual truckload birdseed sale.

Jeffrey Koenen, co-owner and vice president at the store, orders a truckload of birdseed from a local company, then invites members of the local fire departments and rescue squad to help unload the bags of seed from the truck and into customers’ vehicles. All proceeds from the sale go directly to the fire department.

“We usually sell more than 20 pallets of birdseed over two days,” says Koenen. “It’s been a good way to build up our community and highlight the fact that the three departments represented—the rescue squad and the city and town fire departments—are all made up of volunteers. The proceeds from the sale go toward equipment or facility improvements.”

National Fire Prevention Week is in October, so since there are already fire fighters helping out during the event, Koenen invites them to park their fire trucks outside the store. He typically has a sale on smoke detectors, while the fire department has fire safety literature and comic books for children.

This is the sale’s 15th year. Koenen advertises on Facebook, in a local paper and with the chamber of commerce, but customers often start calling even before the first ad goes out to ask about the next sale. He says that, despite the rainy weather this year, the community turned out to buy seed and support their local fire and rescue departments. “This year’s donation will go toward a training facility for fire and rescue training,” he says. “The event gets the community interacting with our first responders and shows them our support.”

Lynnea is the senior graphic designer for Hardware Retailing magazine, where she works on the layout and design of the magazine and other custom publications. She also does print design for NRHA’s marketing materials, programs and other in-house projects. Lynnea graduated from Ball State University with a degree in Graphic Design. She lives in her hometown of Greenwood, Indiana. During her free time, she enjoys designing, painting, reading and volunteering at her family-owned childcare facility.
Previous Garden Gloves
Next Menards Investigated for Possible Labor Law Violation