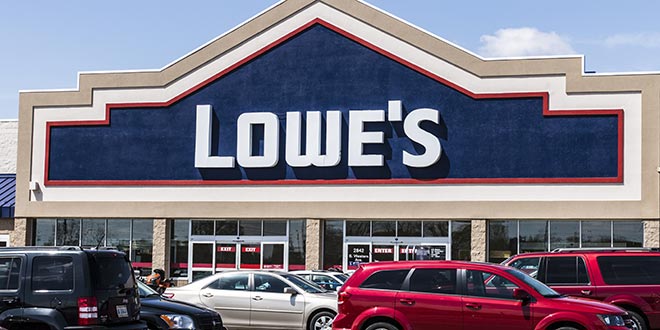 Lowe’s has announced its financial results for the third quarter of 2019. In total, the big-box home improvement company reports net earnings of $1 billion for the quarter, up from $629 million in net earnings for the same period in 2018.

Lowe’s reports sales in the third quarter of $17.4 billion and that comparable sales for U.S. home improvement grew by 3 percent.

“We were pleased with the performance of our U.S. home improvement stores, which reflects a solid macroeconomic backdrop and continued progress in our transformation driven by investments in customer experience, improved merchandise category performance, and continued growth of our pro business,” says president and CEO Marvin Ellison.

One year after announcing plans to exit its Mexico operations, Lowe’s also announced changes to its Canadian operations.

Chiefly, the company will close 34 underperforming stores across the country. The company has also announced its intention to “undertake a process to simplify multiple Canadian store banners to drive efficiency and reduce operational complexity.”

Lowe’s also plans to make changes to its Canadian executive team and streamline its remaining stores’ product assortment “to present a more coordinated assortment to the customer,” according to the release.

“Although we still have work to do, I am confident we are on the right path to build a better Lowe’s and generate long-term profitable growth. We are committed to the Canadian market and are taking decisive action to improve the performance and profitability of our Canadian operations,” Ellison says.

For more information on how Lowe’s and other home improvement leaders fared in fiscal year 2018, be sure you’re subscribed to receive the December 2019 issue of Hardware Retailing. That issue includes the 2019 Market Measure, a complete financial overview of the home improvement industry.

Todd is trends editor for Hardware Retailing magazine. He graduated from Indiana University where he majored in journalism and French. Throughout his career, he has aimed to highlight small businesses and their community value. He joined NRHA in 2017.
Previous Rechargeable Lamp
Next Pet Shelter