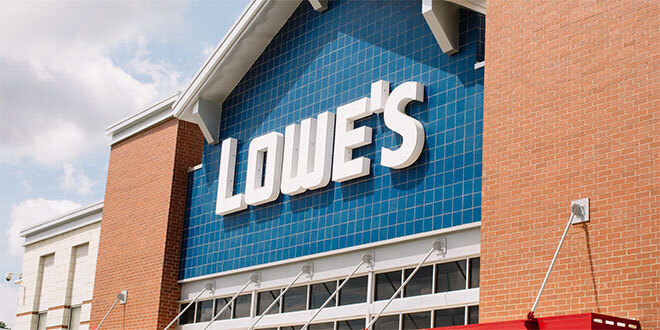 As the pandemic began to affect retail, Ellison says his mission was to give essential employees the tools they needed to safely serve customers.

“The company has always cared about communities, and associates on the frontlines have always been the hallmark of what makes the company special,” Ellison says.

Ellison says the company has given more than $450 million in special payments to employees since March. Lowe’s has also offered telemedicine services to all associates free of charge.

The company usually counts roughly 300,000 employees, but Ellison says this spring, Lowe’s hired an additional 100,000 seasonal associates, including many who had been laid off or furloughed from other retail sectors.

“To me, that’s one of the great contributions we’ve made as a corporate citizen,” Ellison says.

Ellison says seasonal associates will receive immediate benefits, including the bonuses the company has provided since March. In the first quarter of 2020, Lowe’s net sales rose 11 percent over the same period in 2019.

In addition to how Lowe’s is responding to new employee and shopper needs during the pandemic, Ellison also discussed how social justice movements across the world are impacting the home improvement chain. Ellison discussed growing up in rural Tennessee and later advancing to become one of only five Black CEOs of a Fortune 500 company.

Ellison recounted a lesson his father had taught him: to talk less and do more. He says that tenet has guided his time at Lowe’s, where executive team diversity has grown in recent years.

The company is also giving more than $25 million in grants to small businesses owned by minorities. Ellison says Lowe’s received more than 110,000 applications since the program started. He says the swell of applications shows there’s a true need for support at the ground level for many businesses.

Todd is trends editor for Hardware Retailing magazine. He graduated from Indiana University where he majored in journalism and French. Throughout his career, he has aimed to highlight small businesses and their community value. He joined NRHA in 2017.
Previous Pending Home Sales Show 44% Rebound in May
Next Lawn and Garden Event spoga+gafa Postponed Until 2021