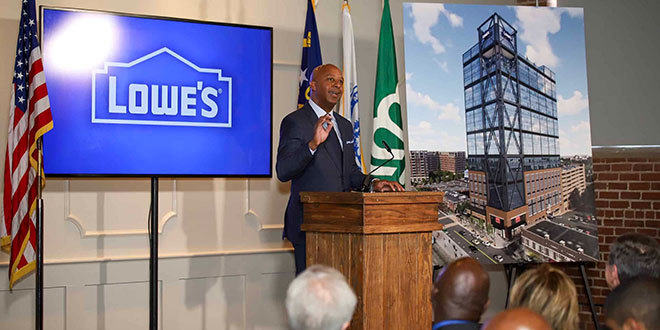 The company says that, once complete, the center will employ approximately 2,000 information technology (IT) workers to help “accelerate the … company’s technology transformation, serving as the epicenter for the team Lowe’s is hiring to modernize its IT systems and build future retail experiences.”

Marvin Ellison, Lowe’s president and CEO, says the company is excited to start construction on the new hub in Charlotte.

“Locating our new facility in the heart of Charlotte, the city’s largest metropolitan area, will enable Lowe’s to attract top technology talent and foster collaboration with our teams in our nearby Mooresville headquarters.”

The new building will be called the Design Center Tower. It will be located in Charlotte’s Design District. Lowe’s technology hub will occupy 15 upper floors in the 23-story building, the company reports.

Lowe’s is expected to break ground on the new tower in August and complete construction by late 2021.

In April, Lowe’s announced a series of job cuts and relocations, including several technology jobs.

Todd is an assistant editor for Hardware Retailing magazine. He graduated from Indiana University where he majored in journalism and French. Throughout his career, he has aimed to highlight small businesses and their community value. He joined NRHA in 2017 and now serves on the news and marketing teams. In his free time, he likes to run, spend time with family and travel the country.
Previous Fire-Starting Carabiner
Next Freezing Wine Cups