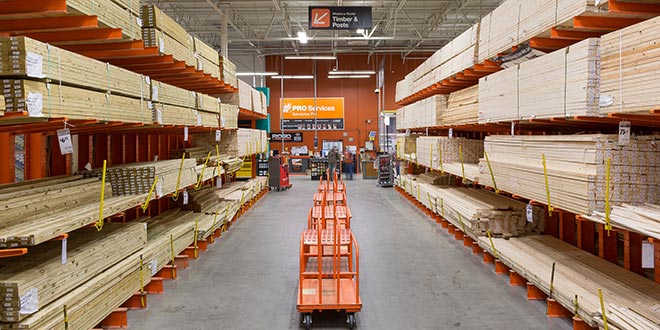 According to the newspaper, Lowe’s signed a lease on a 244,000-square-foot warehouse near Bush Intercontinental Airport, and Home Depot leased a 300,000-square-foot space northwest of the city.

The retailers operate a combined 72 stores in the area.

Hurricane Harvey made landfall in Houston on Aug. 25 , and according to the Chronicle, 136,000 homes were flooded during the storm.

Lowe’s and Home Depot started stocking and distributing from the new warehouses last month, and the companies say the warehouses will stock building materials like drywall and flooring, the newspaper reports.

Tuffli Nguyen, a Houston resident and recovery volunteer cited in the article, says the items needed for recovery aren’t easily found in general big-box stores, like Target and Walmart.

“Things like Sheetrock and face masks, they’re staples to recover from the storm,” he says. Nguyen notes that he has spent more than $1,000 at home improvement stores on cleaning and building supplies.

Melanie is the communications and content manager for the North American Hardware and Paint Association. She joined the NHPA team in 2016 as an editor for Hardware Retailing and now helps lead the communications team to deliver relevant, timely content to the industry.
Previous Water Heater Accessory
Next 10 Business Tips You Can Learn From Baseball