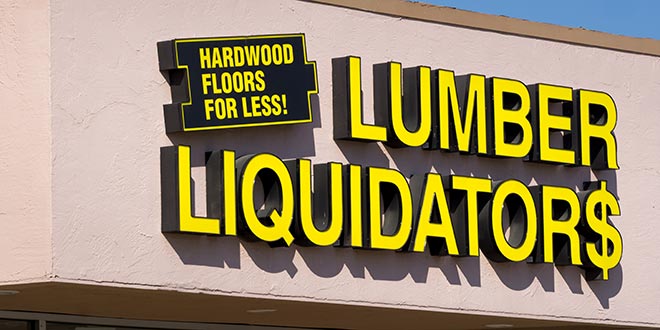 Attorneys representing people who say chemicals from Lumber Liquidators flooring made them ill claim a new settlement, valued at $36 million, excludes their clients.

In October, Lumber Liquidators agreed to pay $26 million in cash and provide $12 million of in-store credit to settle class-action lawsuits related to the flooring, according to the company.

As a result, their case should continue to be considered in court, the attorneys say in the article.

The Centers for Disease Control and Prevention had decided in June 2016 that the laminate flooring could potentially cause breathing problems and increase cancer risks for people.

Lumber Liquidators has been facing lawsuits regarding Chinese-made laminate flooring since 2015, when a “60 Minutes” episode on CNBC inspired a flurry of federal investigations into whether the flooring contained unsafe amounts of formaldehyde.

The company stopped selling the Chinese-made flooring, paid a $2.5 million fine and began providing air quality testing kits to consumers who were using the laminate in their homes. The company had sold the flooring to hundreds of thousands of people.

Kate is profiles editor for Hardware Retailing magazine. She reports on news and industry events and writes about retailers' unique contributions to the independent home improvement sector. She graduated from Cedarville University in her home state of Ohio, where she earned a bachelor's degree in English and minored in creative writing. She loves being an aunt, teaching writing to kids, running, reading, farm living and, as Walt Whitman says, traveling the open road, “healthy, free, the world before me.”
Previous Standing Out Online Is Key Theme at E-Retailer Summit
Next Premium Spray Can Tool