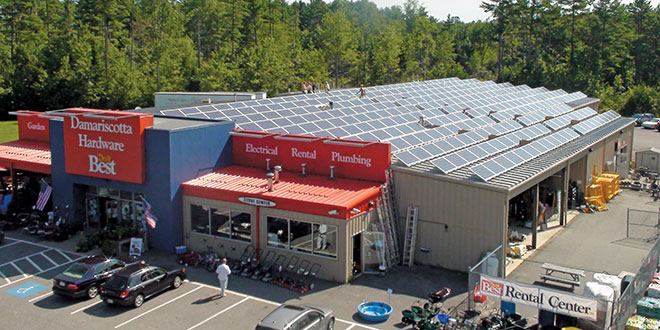 To see a full PDF of this story, click here.

It was almost a decade ago when Rob Gardiner, owner of Damariscotta Hardware in Damariscotta, Maine, was approached by a local contractor to see if he would be interested in installing solar panels on the roof of his business.

Gardiner says he had already made efforts to cut back on his business costs of his Maine hardware store by installing a wood gasification boiler. From that, he was able to reduce the store’s heating oil consumption by 90 percent. He also replaced high-wattage lighting with more efficient fixtures.

“The total system gives us 65 to 70 percent of our annual needs for electricity.”
—Rob Gardiner, Damariscotta Hardware

The team at Maine Energy Performance Solutions (MEPS) was impressed by Gardiner’s efforts and wanted to pitch the idea of installing a photovoltaic (PV) system, or solar panel system, on the store roof. The MEPS team did a presentation for Gardiner on how to fill out the paperwork for a grant, the tax benefits available and the overall savings from installing the system. Gardiner says he was sold on the idea.

“Anything I can do to not give money to the power company, I’m all for,” Gardiner says. “The total system gives us 65 to 70 percent of our annual needs for electricity. On our monthly power bill, we get a small credit for the amount of solar we dump back into the grid. The period from March to September provides a larger credit, and it’s a little less in the winter.”

While utilizing solar has been the right move at one of Gardiner’s stores, his second store isn’t a candidate, and this may be the case for other retailers who are intrigued as well.

“Installing a PV system is not going to work for everybody; it depends on the building, the roof and other factors,” he says. “However, I think the technology will continue to improve in the future, and it’s something to consider.”

Renee Changnon is the retail outreach coordinator for NRHA. She meets with retailers in their stores and at industry events and introduces them to the services NRHA provides. Renee previously worked as a member of the NRHA communications team. She earned a degree in visual journalism from Illinois State University, where she served as the features editor for the school newspaper. After college, she implemented marketing and promotions initiatives at Jimmy John’s franchise locations across the country. She enjoys exploring books with her book club, Netflix marathons and hosting goat yoga at her apartment complex. Renee Changnon 317-275-9442 rchangnon@nrha.org
Previous Village Supply Joins PRO Group
Next TreeHouse Shines Light on Solar Solutions