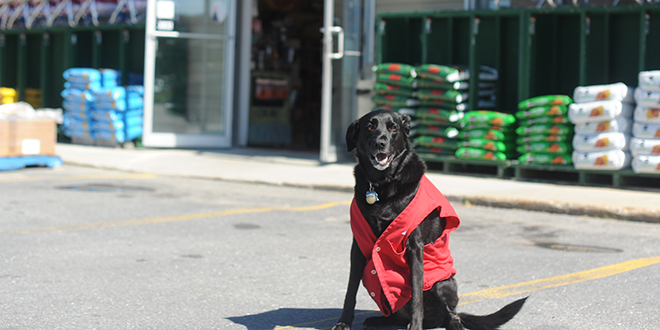 When customers arrive at Oak Hill Hardware in Scarborough, Maine, they know they’ll be greeted with a smile and a wagging tail.

Black Lab mix Rivet is a local celebrity, sought out by children and adults who drop in sometimes just to give her a treat. For Rebecca Wood, marketing manager for Oak Hill Hardware and Dunstan Hardware, the two stores and the people in it are family, both by blood and by choice.

“We have a really close-knit family and the same can be said about our employees in our hardware family,” Rebecca says. “We make sure to be a part of the community and the community supports us.”

In this article, Rebecca talks about her family’s commitment to the community, her love of the hardware industry and the special service that separates their business from the competition.

In 1971, Pat and Harry Hughes opened Oak Hill Hardware in Scarborough, Maine. A decade later, they opened Dunstan Hardware in west Scarborough. It was 1977 when Rebecca’s dad, Dan Johnson, got his first job in the hardware industry, when he was still a high school student.

“My dad lived down the street from Oak Hill Hardware and would visit the store frequently as a high schooler,” Rebecca says. “One time while he was there shopping, they asked if he wanted a job. He was hired and started working that day. We joke about it because he got home later than his mom thought and when she asked where he had been, he just said, ‘Oh, I got a job!’”

Over the years, Dan became a manager of the Pond Cove Hardware store in Cape Elizabeth, Maine, and then returned to Oak Hill Hardware when that store closed in the mid-1980s, she says.

While she was growing up, Rebecca and her brother Nate Johnson, learned the ropes of the hardware industry from their dad. Today, Dan owns the two-store operation with his wife Anne and it has truly become a family affair.

“My dad worked his way up from a sales associate to a sales manager and then became the general manager of both locations,” Rebecca says. “It was 2014 when my parents bought the stores.”

Rebecca’s husband Tyler Wood is the manager of the Dunstan store, and Nate manages the Oak Hill store. The community has a population of about 20,000 people and in the summer, visitors from far and wide come to visit its pristine beaches.

In the early 2000s, Oak Hill expanded its salesfloor by converting adjoining space in the same building. A further expansion of the sales floor and back office was completed earlier this year.

Being in a smaller community that sees a massive increase in visitors during the warmer months, Rebecca says both stores are constantly looking for ways to stand out and attract both new and repeat customers.

“We have a mix of regular DIY customers and commercial accounts we see on a daily basis,” she says. “However, with the increase in beach houses and people traveling here in the summer months, we’re expanding our RV assortment and our pool accessories. We also make sure to be stocked up on outdoor gear and products that our seasonal customers know they can expect to find at our stores.”

According to Rebecca, one of the biggest changes over the years is that technology has allowed customers to stay in the loop with the business through social media and email marketing.

Another big attraction for customers is River, the business’s four-legged companion, she says.

“People visit our Oak Hill Hardware store and are always looking to see Rivet,” Rebecca says. “We even made up business cards for her, calling her our vice president of customer and employee happiness.”

When customers come to the store and greet Rivet, she will often lead them right to the pet aisle, where they’ll find a bucket of treats to give to her. She’s been in the store ever since she was a puppy, so she does well in a retail environment and won’t run off or get into trouble, Rebecca says.

“We really love animals in our family,” she says. “My dad always has Rivet by his side. He’ll get in the Ace truck and she’ll hop in right next to him, ready to head to work. We have other dogs we bring to the store, but they usually stay in the back office.”

As longtime locals in Scarborough, Rebecca says the family is very involved in the community.

“My parents grew up here and went to high school together,” she says. “They’ve remained in the community and my brother and I have, too. I think our customers appreciate us because they know we’ll be there for anyone if they need it. Dad will even open the store up late to help someone in a pinch.”

To help bring their community together, Rebecca says hosting events are a big part of their marketing efforts.

“For the last six years, we’ve hosted an annual garden party in April,” she says. “We offer a 20-percent on products, we’ll have giveaways and we’ll sell 10 bags of topsoil for $10. In the past few years, upwards of 2,500 bags of topsoil were sold at each event!”

Outside of their own unique events, both stores participate in the many national events their co-op promotes.

“We know that the consumer is always changing and looking for deals, but we’ve found that having that personal touch is huge,” Rebecca says. “We offer helpful advice, we have the products they’re looking for and if they just want to come by and say hi to Rivet, they can do that, too.”

Renee Changnon is the retail outreach coordinator for NRHA. She meets with retailers in their stores and at industry events and introduces them to the services NRHA provides. Renee previously worked as a member of the NRHA communications team. She earned a degree in visual journalism from Illinois State University, where she served as the features editor for the school newspaper. After college, she implemented marketing and promotions initiatives at Jimmy John’s franchise locations across the country. She enjoys exploring books with her book club, Netflix marathons and hosting goat yoga at her apartment complex. Renee Changnon 317-275-9442 rchangnon@nrha.org
Previous Walmart to Fund College Degrees for Employees
Next Car Scent Diffuser