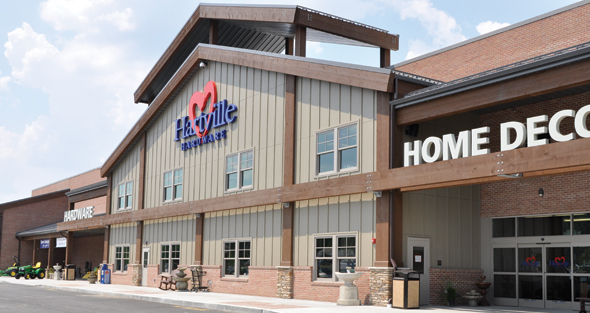 When referring to home improvement retailing, it’s typical to correlate big outlets with the stark, cement environments often found in warehouse models. But the team at Hartville Hardware had a different idea for their store. When they were planning an expansion, they made a commitment to load every square foot with innovative merchandising solutions and product assortments. The resulting 305,000- square-foot store is inspiring.

Hartville Hardware first opened its doors on March 3, 1972, in a modest but effective facility in Hartville, Ohio. But as the store’s sales started growing, it gradually expanded. And when 100,000 square feet wasn’t big enough to accommodate the inventory, the Hartville team moved the operation to an entirely new location. The common thread throughout Hartville’s history has been the vision and passion of brothers Howard and Wayne Miller who, along with their family, own and run the store and several other businesses on the same property.

Today it’s that vision that has helped the company earn the distinction as the largest independent hardware store in America. Packed with the variety and depth only 75,000 SKUs can offer, the store’s centerpiece is a 127,000-square-foot main level that features a 1,850-square-foot ranch-style model home decked out with almost exclusively Made in America materials and fixtures. On its lower level, Hartville features 127,000 square feet of additional retail space and a three-lane drive-thru lumber area that opens early for contractor customers.

Perhaps even larger than the store’s square footage is its commitment to customer service and a history rooted in maintaining family values that have allowed it to expand on such a massive scale, owner Howard Miller says. “You need to be good at something and build on that. Also treat your customers like you would want to be treated. Those two things have worked really well for us.” 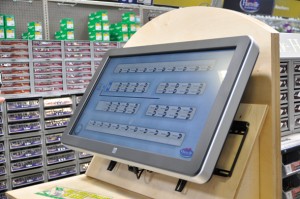 Hartville Hardware’s story starts like that of many other family-owned hardware stores.

One evening the Millers’ father asked Wayne and Howard if they’d like to buy a 5,000-square-foot hardware store in the family’s hometown of Hartville.

The only catch: Someone else wanted to purchase the store the next day, leaving the brothers less than 24 hours to decide if they wanted to get into the hardware business.

“After my dad asked (about the store), we decided to go for it. Hartville was where we wanted to be,” Howard says.

Two years after their father, also named Howard, purchased and opened the downtown store, Hartville Hardware moved half a mile down the road into a 22,500-square-foot building. Over the years, it became known for its tool and housewares departments while the Miller family’s restaurant businesses also continued to grow. Gaining in popularity and lacking in space, the Millers added onto the store five times. But soon they ran into a problem. “We’d continued to grow, but we were cut up and it was hard to do business there.”

In 1980, Howard (senior) had purchased 200 acres of land with the intention of housing all the family’s businesses on one centralized property. The Hartville Kitchen and MarketPlace & Flea Market had already recently made the move, so fulfilling his father’s vision of relocating and expanding the hardware store onto the property seemed to make sense. “It felt like if we wanted to be in this business for the long term we needed to do something different and build a new store.”

With that goal in mind, the Miller brothers joined Do it Best Corp. in 2002. They felt the co-op was best aligned to help them realize their vision. Then they began traveling around the country in 2007 to gather ideas for what they’d like to include in their “dream store,” which finally became a reality on April 12 when it opened to the public to “99 percent positive reviews,” Howard says. 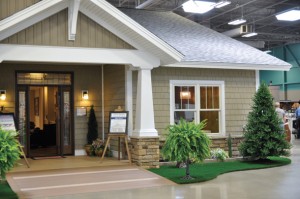 Since the store’s opening, the main draw for many customers has been its 1,850-square-foot ranch-style “idea house” comprised almost entirely of Made in America items, 90 percent of which can be purchased in the store and taken home the same day.

“I was at a home and garden show in line to get into a model home they had and thought it would make a lot of sense to include in our business,” Howard says.

Located just behind the home are four housing facades unique to eastern Ohio—Victorian, Craftsman, Traditional Farmhouse and Western Reserve—which showcase products and materials sold in the store’s downstairs building center. With this setup, customers can look at a whole project in parts and customize it to their own tastes and needs.

Part of what makes the housewares department, and the entire store, uniquely successful is its proximity to the family’s other destination businesses, which together bring in 2.5 million visitors annually to the town of 3,000, according to the local chamber of commerce.

The 100,000 square-foot, home-style Hartville Kitchen restaurant next door seats about 325 people and has a 500-seat banquet room. Among its offerings are 20 varieties of pie, the family’s brand of salad dressing and a 15,000-square-foot gift shop.

On the other side of the hardware store, the Hartville MarketPlace & Flea Market houses 175 vendors year-round and hosts an outdoor flea market with 500 to 1,000 vendors, four days a week during the summer. “One of the things we try to advertise and promote is that people can come here and make a day of it. They can spend a long time between the hardware, the restaurant and the flea market,” he says.

The move has so far been good for business: Since moving the store to the same property as the Hartville Kitchen and the MarketPlace & Flea Market, hardware sales have gone up 79 percent.

Built with Professionals in Mind 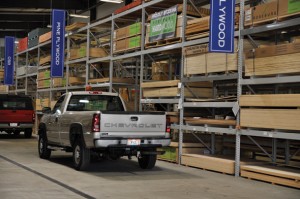 While Hartville primarily caters to DIYers, who account for about 60 percent of sales, the Millers also kept professionals in mind when developing plans for their new store’s layout. The lower level’s open design makes it easier for contractor customers to pick up product—especially larger orders of back stock—themselves. The three-lane drive-thru lumberyard entrance also opens earlier than the rest of the store to suit contractors’ needs.

The Millers also decided to go big with another of its popular departments—power tools—on the store’s upper level and have already noticed an uptick in sales.

They partnered with several brand-name tool and builders’ hardware vendors, providing them dedicated floor space on which they could design and build their own product areas. “Accessory sales have now increased because they are part of the display of power tools,” Miller says. Among the large and advanced displays are the more than 4,000 square feet of space dedicated to Carhartt clothing and accessories, space dedicated to John Deere and a touchscreen directional display and navigation tool from Hillman Fasteners in the store’s builders’ hardware department.

Challenges and the Future

Being the country’s largest independent hardware store brings unique challenges. “We’ve added 40 employees and some people still don’t think we have as many people as we had in the old store,” Howard says of the new store’s 220 employees.

There are still some projects to be completed, including building kitchen and bath display areas behind the four home facade exteriors and as with many newly opened stores, getting customers and employees acquainted to the new store’s layout will take some time, he says.

“We want to get Hartville at a good place to pass on to the future generation,” says Howard. “So much of our success came from those before us and we owe them that.”

Hartville Hardware’s innovative store design is full of attractive, practical and energy-efficient features, making it a destination store for customers while also cutting down on expenses, the goal throughout the expansion and renovation process, Howard says.

Check out highlights of the store’s unique features below:

Amanda Bell was an assistant editor of Hardware Retailing and NRHA. Amanda regularly visited with home improvement retailers across the country and attended industry events and seminars. She earned a degree in magazine journalism from Ball State University and has received honors for her work for Hardware Retailing from the Association of Marketing and Communication Professionals.
Previous Community Minded
Next Protect Your Store from Refund Fraud