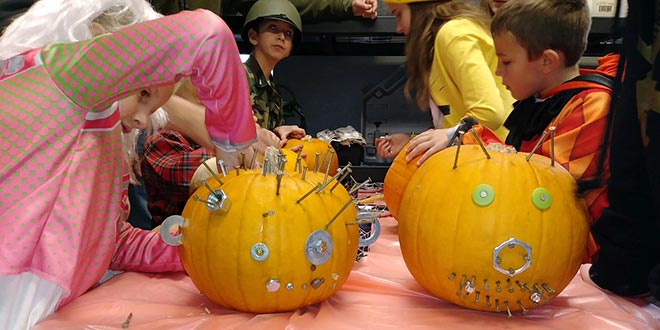 In Markleysburg, Pennsylvania, local businesses came together to put a spell on shoppers just in time for Halloween.

On Oct. 20, Marcon Building Supply hosted its first Halloween-themed event to bring customers of all ages through its doors, meet the employees and bring the community together.

From organizing a trick-or-treating event that featured a variety of local businesses to providing fun activities for children to participate in at the home improvement business, leaders of Marcon Building Supply worked with their community and employees to make the event something customers would remember for years to come.

As the second major event hosted at the store since new owners Jubal and Jennifer Margroff rebranded the business, the Halloween-themed festivities mark a fresh focus on community involvement that the business hopes to continue in the years ahead.

The event was planned and rolled out by co-owner and vice president Jennifer Margroff, the store’s manager Autumn Shunk and fellow employees Stephanie, Dana, Jamie and Joanne. The team says community events like this Halloween bash bring families to the business and become celebrations local customers look forward to each year.

Planning Ahead, Looking Toward the Future

For the past three years, the Margroffs have owned and operated Dennis Lumber, but recently, they decided to rebrand the business to Marcon Building Supply, Jennifer Margroff says. With that name change, they wanted to make sure the community knew the company was still open for business.

“Markleysburg is a small community, so when we decided to rebrand the business, we wanted to make sure our customers knew we were still around,” she says. “After hosting our first event under our new name in September, we decided to continue that momentum and get in the Halloween spirit the following month.”

Margroff and Shunk worked closely after the September event to create a plan for their Halloween celebration.

“We wanted to collaborate with other small businesses through trick-or-treating,” Shunk says. “We had 12 small businesses that participated alongside us and it really brought loyal customers from all these businesses out, which helped increase foot traffic to all the different locations.”

In addition to organizing the trick-or-treating event among various small businesses, Marcon Building Supply hosted a Halloween costume contest and hosted a pumpkin decorating activity for children that utilized tools found in the store. Children got in the Halloween spirit by creating Franken-Pumpkins alongside their parents and store employees.

“Autumn and I thought it would be fun to do an activity with kids, so we came up with the idea to show kids how to make Franken-Pumpkins,” Margroff says. “We had items like nails and other bits and pieces that kids could choose from. Their parents helped them make fun faces on pumpkins with the hardware pieces. It was really amazing to see some of the creative ideas the kids came up with.”

Both Margroff and Shunk agree it wouldn’t be Halloween without dressing up! During the event, the store encouraged all kids to participate in the costume contest. The judges included Margroff, her daughter Liz, her sister-in-law Heather Margroff and employee Joanne Wilson. They chose from a variety of different categories, including the cutest costume, best group costume, scariest costume and more, Shunk says.

All of the employees were asked to dress in costume during the day, which Margoff says is just one example of how the management team strives to make an exciting, energetic environment at Marcon Building Supply.

“Our team is 30 employees and it’s a fun group,” Margroff says. “We’ve received great feedback from the event; everyone is asking what our next event will be. We even streamed a live video on Facebook during the event and we’re blown away that in just a few days, the video has 1,000 views. It makes us happy to know we’re bringing the community together.”

Now that Halloween is behind them, Shunk says they’re already working on plans for a holiday-themed event this December.

“Hosting events around holidays and hosting events that can welcome an entire family are what we’re trying to focus on,” Shunk says. “Having been Dennis Lumber for 40 years, these events are also a great was to build brand awareness, increase foot traffic and let our community know Marcon Building Supply is here for them.”

Renee Changnon is the retail outreach coordinator for NRHA. She meets with retailers in their stores and at industry events and introduces them to the services NRHA provides. Renee previously worked as a member of the NRHA communications team. She earned a degree in visual journalism from Illinois State University, where she served as the features editor for the school newspaper. After college, she implemented marketing and promotions initiatives at Jimmy John’s franchise locations across the country. She enjoys exploring books with her book club, Netflix marathons and hosting goat yoga at her apartment complex. Renee Changnon 317-275-9442 rchangnon@nrha.org
Previous Using Your Store’s Exterior to Get Customers Inside
Next High-Performance Blender