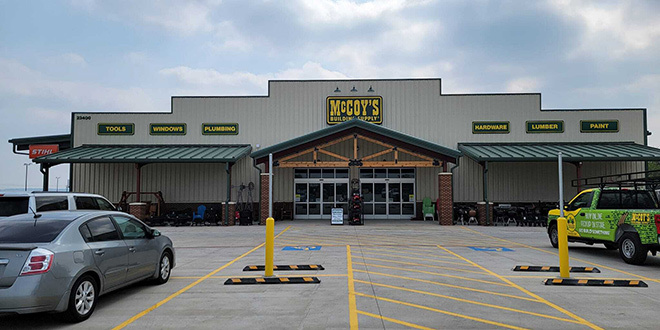 Meagan McCoy Jones has been named president and CEO of McCoy’s Building Supply and assumes her position on June 1, 2022. Jones will be responsible for overseeing the company headquartered in San Marcos, Texas. Jones succeeds her father, Brian McCoy, who is retiring after a 50-year career with McCoy’s Building Supply. McCoy has served as sole CEO since 2001.

“A company like ours doesn’t succeed over this many decades without hard work, hustle and the deep loyalty of our team and trust of our customers. I’ve grown up at McCoy’s with the patience, help and support of so many. Through them I fell in love with our business and industry,” says Jones. “Being a private, family company is an advantage and privilege, and we don’t take that for granted. We continue to invest in upgrading stores, building stores in new markets and growing our distribution, manufacturing and delivery service so customers can count on McCoy’s for decades to come.”

Jones is the fourth generation of the McCoy family to lead McCoy’s Building Supply. Though she’d been working summer jobs at McCoy’s since she was very young, she officially joined the company’s management team in 2007 as an assistant manager at McCoy’s Austin Manchaca location. After spending time in the field, Jones moved into a position at headquarters focusing on business operations with special attention on growing the next generation of leaders at McCoy’s. Jones’ role in the company steadily expanded over the past 10 years, and since 2018 she has served as president and chief operating officer.

“I am so grateful for the opportunity to work in and lead our family business for these past 50 years,” says Brian McCoy. 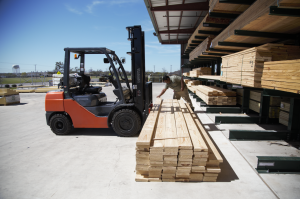 “Passing the leadership to our family’s fourth generation is such a joy. Meagan is eminently qualified to be CEO, and I have so enjoyed working with her these past 20 years.”

“Dad is generous, optimistic and sees the best in each of us. He has inspired two generations of McCoy’s leaders to sweat the details and give to others first. We wouldn’t have made it as a company without his endurance and optimism, and I wouldn’t have made it as a leader without his intentional mentoring of me,” says Jones. “I’m proud of the care and focus throughout our leadership team—our plans are to continue to grow and serve our customers with relevance and signature McCoy style.”

Jones received a master’s degree in communications from the University of Texas Austin, and a bachelor’s degree from the University of Richmond in Virginia. Jones is a member of the board of directors of McCoy Corporation, a partner in McCoy Remme Ranches, co-chair of the Legislative Committee of the Lumbermen’s Association of Texas, a board member of the Texas Association of Builders and an involved member of the Greater San Marcos Partnership working on issues related to development, conservation and affordable housing. She is a former board member and passionate supporter of Mobile Loaves & Fishes, a social outreach ministry that empowers communities into a lifestyle of service to the homeless.

Jones received the Young Retailer of the Year Award from the North American Hardware and Paint Association in 2013.

Carly joined the NHPA staff in 2021 as an associate editor. Born and raised in Indiana, Carly earned a B.A. in English from Indiana University Bloomington. She enjoys reading, hiking, and cheering on the Indiana Hoosiers.
Previous Farm, Pet and Ranch Merchandising Display Ideas
Next Consumers React to Supply Chain Issues and Inflation