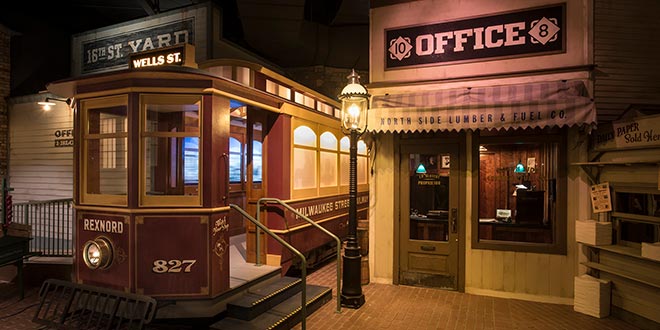 Milwaukee Family Business Keeps the Past Alive With Museum Exhibit

Imagine having the ability to travel more than a century back in time. While there, you’re able to walk the streets of the city you call home and explore what it was like at the end of the 19th century. While time travel is not an option, walking through the Streets of Old Milwaukee exhibit at the Milwaukee Public Museum gives Eli Bliffert, owner of Bliffert Lumber and Hardware, a glimpse at what his great-great grandfather experienced as an independent retailer.

Three years ago, the Milwaukee Public Museum reimagined the exhibit for its 50th anniversary, and Bliffert Lumber and Hardware had the opportunity to collaborate with the museum to give visitors a look at how the business operated decades ago. They donated materials and artifacts to bring the office of its business, originally called North Side Lumber & Fuel Company, to life through the exhibit.

“My wife Lisa works at the museum and we have been involved with the museum for years,” Eli says. “When we were approached to sponsor and donate materials, we took the interior of the old, original office, stripped the wood paneling, light fixtures and other details and gave them to the museum to represent the business.”

Donating time and materials to the museum is just one example of how the Bliffert family has contributed to the Milwaukee community for more than 100 years.

Christian Meckelberg, Eli’s great-great grandfather, established the family business in Milwaukee in the 1880s. For years, Christian would send his daughter to the bank each week, and there she met a bank teller named J.P. Bliffert, who she later ended up marrying. In 1904, the company was finally incorporated and J.P. quit his job at the bank to work with his father-in-law.

After Christian died, J.P. took over the business. That started a period of growth for the company, Eli says. J.P. expanded from one location to six, which proved to be a smart business decision because lumberyards at that time had small delivery areas, and increasing the number of locations helped satisfy more customers and reach new markets.

“Lumber in the early 1900s was delivered by horse-drawn wagon,” Eli says. “North Side Lumber & Fuel Company had a stable and horses on-site and it took a lot longer to get materials where they needed to go. It wasn’t until 1919 the first truck was purchased for the business.”

The products sold in the early years included coal, oil, nails, windows, roofing materials and sawdust to keep ice cold. The company also did millwork, made flooring and sold soft and hardwood lumber from North America and some South American forests. Shortly after World War I, the name was changed to reflect the Bliffert ownership, and it has remained Bliffert Lumber and Hardware ever since, Eli says.

While almost all of the company’s competitors over the years have now closed up shop, Eli believes his family business has persevered because of each generation’s commitment to keep it going and continue serving the Milwaukee community.

“I think we’re really fortunate that there has been a family member that has wanted to run the lumber company as the years have gone on,” Eli says. “I’m the fifth generation and I believe the key has been thinking about business in the long term.”

In addition to the several generations of Blifferts who continue to keep the family business thriving, Eli says the store has also been successful thanks to employees and customers throughout the years who worked for and shopped at the business instead of at nearby big-box competitors.

An Important Part of the Community

In order to keep a business growing and thriving for more than a century, Eli says retailers need to keep community top of mind.

“Community involvement is huge—we wouldn’t be here for over 100 years without putting down roots with the organizations and community of people around us,” he says. “The way I see it, we’re all in it together. We’re the only independent lumber company left inside the city of Milwaukee. I believe we’re here because we’ve put down such longstanding ties to community groups.”

Thanks to Bliffert Lumber and Hardware’s longtime support of the Milwaukee Public Museum, the museum has shown its gratitude through the years by going to the hardware store to buy materials for different projects in the works.

The Bliffert family also supports its community by working with a variety of organizations, including Habitat for Humanity, and several church and youth groups, urban gardening groups and much more.

Another way the business supports the Milwaukee area is by employing 180 locals, both full- and part-time. To keep employees happy and loyal to the family-owned business, Eli says they ensure their full-time employees receive great benefits, including health insurance and a 401(k).

Although Bliffert Lumber and Hardware is a major part of the Milwaukee community, Eli says they also have found success over the years thanks in part to the many ways they the company stays involved in the overall independent home improvement industry.

“We’re involved in the Wisconsin Retail Lumber Association because it helps us learn and grow through educational classes and establishing relationships with other independents in the state,” Eli says. “To us, it’s important to know what’s going on in the industry, both nationally and internationally.”

Eli himself is directly involved in the industry, serving as a board member for Do it Best Corp. He was even recognized by the North American Retail Hardware Association (NRHA) as one of the industry’s 2016 Top Guns.

While the industry continues to change, Eli says his company tries to focus on its employees and customers. Through it all, Bliffert Lumber and Hardware will continue to serve the Milwaukee community and work with the home improvement industry as a whole.

Although locals won’t see a horse-drawn delivery of lumber to a job site, Eli and other longtime employees are ready and willing to solve problems, just as they’ve been doing for over 100 years. Yet as the business continue to grow and the retail marketplace changes, locals visiting the Milwaukee Public Museum will get a closer look at the origins of this longstanding family business.

“If my great-great grandfather Christian could see the business today, he’d be amazed at the variety of different products we sell compared to when he started the business,” Eli says. “I think he’d be very proud.”

Renee Changnon is the retail outreach coordinator for NRHA. She meets with retailers in their stores and at industry events and introduces them to the services NRHA provides. Renee previously worked as a member of the NRHA communications team. She earned a degree in visual journalism from Illinois State University, where she served as the features editor for the school newspaper. After college, she implemented marketing and promotions initiatives at Jimmy John’s franchise locations across the country. She enjoys exploring books with her book club, Netflix marathons and hosting goat yoga at her apartment complex. Renee Changnon 317-275-9442 rchangnon@nrha.org
Previous Reimagine Retail Winner Opens In-Store Restaurant
Next Decorative Wine Stoppers