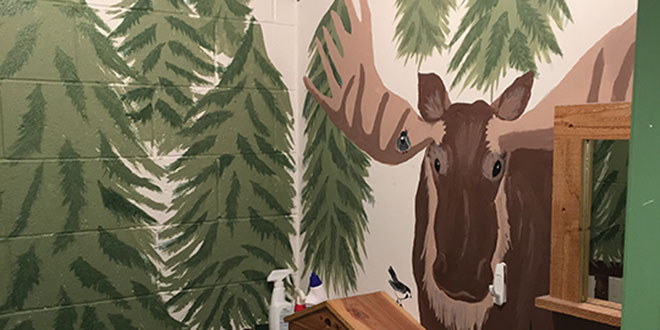 It’s an oft-heard cliché with time-tested locations: If these walls could talk.

So, first-time customers may be surprised when they walk into Seiler’s Hardware in Three Forks, Montana. The store, open for 30-plus years and under the ownership of Ryan and Brooke Pestel for the past year and a half, tells the story of multiple young employees who got their start in the workforce at Seiler’s.

The murals are the lasting reminders of a long-term program first enacted under the previous owner of Seiler’s Hardware, Richard Seiler. The program was designed to bring a freshman from the local high school into the store as an employee, working each summer until their senior year and learning the ins and outs of an independent business.

Then, when this young employee was ready to graduate and move on into the world, they were invited to paint a lasting image somewhere in the store.

As the years have gone by, the store’s interior has taken on the personality of these employees and left the store with a unique look, too.

“I was pretty much born and raised in Three Forks, so I’ve grown up with the murals at Seiler’s. They’ve just always been there, but even I didn’t know about all of them until I was interested in buying the store,” Ryan Pestel says, adding that the offices above the salesfloor feature even more artwork.

The most famous of the works is probably the large forest scene in the store’s bathroom area, Pestel says. The mural, painted by two female employees after their high school years, features a large moose amongst an assortment of trees across the walls. It allows visitors to feel like they’re out in the wilderness Montana is so well known for.

Other designs include a castle scene, and a more abstract piece showing the transition of day into night.

Having worked in the construction business for most of his career, Ryan Pestel saw Seiler’s Hardware as the next step for him and his family. He says his son is already planning to take over the store in the future, and he wants to continue the program of bringing on high school students to learn the hardware business from the inside.

And yes, maybe make a little art along the way.

“Last year, I hired a freshman, so now we have a sophomore on staff. I think I’ll make this kind of hire every two years, so we’ll always have two on staff at a time. So we should be looking at a new mural every two years,” Ryan Pestel says.

Chad is an assistant editor for Hardware Retailing magazine. A Purdue University graduate, Chad has covered sports and news at the high school, college and Olympic levels as a sports writer, editor and designer for multiple newspapers. Prior to joining the NRHA, he was the sports editor for the Herald Journal in Monticello, Indiana, and a designer and copy editor for the AIM Media Indiana group in Columbus, Indiana. When not cultivating his beard, he enjoys backpacking, cooking, traveling and watching too much sports and Netflix.
Previous Magnetic Dryer Vent
Next Small Business Owners Optimistic About Business Health