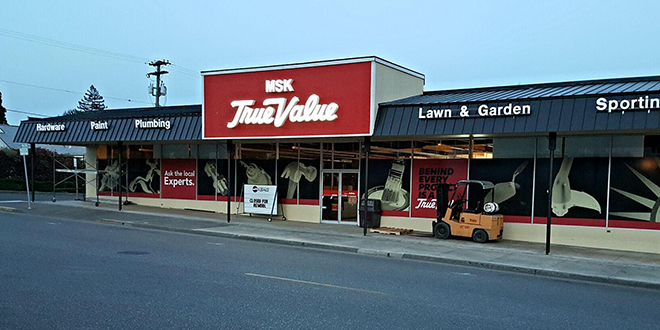 A part-time job in high school often lays the foundation for the work ethic an individual brings with them in their future endeavors.

For Jeff Johnson, working at Del’s Building Supply, now known as MSK Building Supply, in Myrtle Creek, Oregon, in the 1990s gave him a chance to learn the meaning of hard work. Yet he never would have imagined nearly a decade later his part-time job would become a lifelong career.

While working at the store, Johnson built a close relationship with Dick and Shirley Petterson, owners of the building supply business, and that relationship continued even after he left for college.

After graduating, he got a job as the human resources manager of a local saw mill in town. One day he was visiting with Dick when Dick asked Johnson if he’d be interested in buying the business.

“Within two to three weeks of Dick approaching me about buying his store, we were negotiating how the transition would work, and a month later we closed the deal,” Johnson says. “I wasn’t looking to change jobs, but it was too great of an opportunity to pass up, so I went for it.”

Although Johnson says he has faced struggles over the years, like figuring out how to survive and thrive in the 2008 recession, he has enjoyed the challenges and rewards of owning and operating his own business. Now he owns two stores and an industrial supply business. He acquired his most recent store, MSK True Value, in 2015, and went through a Destination True Value (DTV) remodel with the help of his distributor.

Open to New Opportunities
When Johnson purchased Del’s Building Supply in November 2001, he was excited to serve the community and help his neighbors with their home improvement needs. In the past 17 years, he has taken on new areas of business to help diversify his offerings and remain the go-to local retailer for DIYers and pros.

In 2004, he opened Dale’s Industrial Supply, a industrial supply branch of Del’s Building Supply, in order to compete with a big-box store that was going to be built 25 miles away.

In 2015, a nearby independent hardware business was going out of business, and Johnson decided to buy the retail space.

“The store was about 9,000 square feet, and when we took it over, I wanted to redo the layout and make it look brand-new,” Johnson says. “We made it a hardware store with some housewares and a bigger lawn and garden section. We also sell appliances and sporting goods. It’s been a good move for us.”

According to Johnson, they were able to complete the DTV remodel efficiently with the help of True Value and the associates who were on hand throughout the entire process.

“Remodeling our new store was a lot of work, but True Value was a great help,” Johnson says. “Now we’re considering moving MSK Building Supply to a new site and utilizing the DTV program again.”

Supplying the Local Community
Whether it’s MSK True Value or MSK Building Supply, Johnson says providing his friends and neighbors with the products they need at home and on work sites makes his job rewarding.

Myrtle Creek has a total population of about 3,800 people, but the surrounding communities pull anywhere from 15,000 to 20,000 people to both stores.

“Being in a small rural town like Myrtle Creek, everybody knows each other,” Johnson says. “I think the things I appreciate most about our community is the camaraderie we have. I see a lot of the same people on a weekly or even daily basis, and it’s great to have those relationships.”

As a business owner in a small community, Johnson is focused on giving back through the business and by volunteering whenever he can.

One of the defining characteristics that set his retail operations apart from competitors is its customer service, Johnson says.

“MSK Building Supply has been in business since the 1950s and has only had three sets of owners,” Johnson says. “We know our customers’ names, and my employees always go the extra mile to help them and get what they need.”

The location where the two businesses are located has also allowed the company to continue to thrive, Johnson says.

“The nearest big-box store is about 25 miles away, and the closest building supply competitor is another 20 minutes away,” Johnson says. “If someone needs something, they don’t have to drive far to get it; they can just come to one of our stores and get on with their day. Plus, they know they’ll get the customer service from our employees that you won’t always find at a big box.”

A Welcome Business Partner
Ever since Johnson has been involved with the business, True Value has always been a part of the mix. Now, as the owner, he says he appreciates the fact that his distributor understands every store has unique needs, obstacles and goals.

“True Value is there when we need them, but they have never forced us to go in a certain direction,” Johnson says. “They’re very flexible and understand that nothing is one size fits all. It’s been very easy to work with them.”

For Johnson, having an active sales representative who makes a point to be involved in his business gives a personal touch to his wholesaler’s services.

“I really appreciate Steve Cuday, our sales rep,” Johnson says. “He makes sure to keep me in the loop on the latest products and programs, and I know he is looking out for things that would fit my business by sharing ideas and suggestions with me.”

In addition to buying from True Value, Johnson says he has utilized several programs True Value offers, from the DTV remodel program to True Value Rewards and a unique marketing strategy that works for his local audience.

“The True Value Rewards program has been a very successful way for us to get to know our customers,” he says. “It gives us an idea of how they shop and what they shop for, which is priceless.”

Recently, Johnson says his operation has changed from print advertising to a mixture of print and digital.

“I feel like True Value is on the right track with its marketing programs,” Johnson says. “We’re seeing a positive difference from our new marketing approach, and we’re changing with the times and trying to be on the forefront of new marketing opportunities. People shop a lot differently than they used to.”

Johnson says he has remained part of True Value because he appreciates that the company doesn’t have strict membership requirements. He adds that the changes that occured at True Value last spring with the acquisition to ACON Investments were positive developments.

“In my opinion, True Value is becoming more competitive, and nothing has changed from the retailer side of things,” Johnson says. “That’s the biggest realization I’ve had. True Value continues to work with all retailers to help them become more successful.”

As Johnson looks to the future of retail, he says there are many things he can’t predict, but with support from True Value, he is confident he and his team can handle anything that comes their way.

“Retail is changing every day, every month and every year,” Johnson says. “It’s really a constantly moving target for retailers to strive to stay relevant in our communities and with our customers. However, I feel like True Value gives us the tools we need, and I’m excited to see what will happen in the future.”

Renee Changnon is the retail outreach coordinator for NRHA. She meets with retailers in their stores and at industry events and introduces them to the services NRHA provides. Renee previously worked as a member of the NRHA communications team. She earned a degree in visual journalism from Illinois State University, where she served as the features editor for the school newspaper. After college, she implemented marketing and promotions initiatives at Jimmy John’s franchise locations across the country. She enjoys exploring books with her book club, Netflix marathons and hosting goat yoga at her apartment complex. Renee Changnon 317-275-9442 rchangnon@nrha.org
Previous Cleaner and Degreaser
Next 5 States Seeking Film Industry Glory Through Incentives