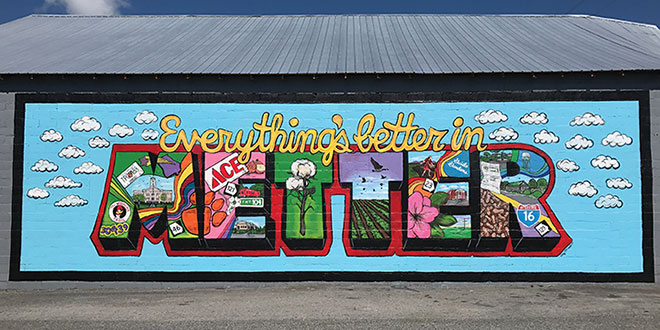 For a long time, the building behind Trapnell-Tomlinson Co. in Metter, Georgia, had just a blank wall on the east end that could easily be seen from a major thoroughfare for the community. Owner Pernal Franklin has long envisioned having a mural on the wall that drew attention not just to his store, but to the community as a whole. He was just unsure of how to proceed.

“I could not come up with someone to do it, nor did I know what to include in the painting,” he says.

Metter Middle School art teacher Kelly Brockway had a vision in mind for such a project. Once Franklin shared his thoughts, Brockway began developing the idea. “Using an old post card as a reference, we wanted to use our local slogan, ‘Everything’s Better in Metter,’ to tell a story about our wonderful little town that God has blessed us with,” Franklin says.

Once Brockway established a design for the project, she laid the mural off in squares and had some of her art students assist her in laying out and painting the mural.

Liz is the special projects editor for Hardware Retailing magazine. She reports on news and trends, visits retailers, and attends industry events. She graduated from Xavier University, where she earned a degree in English and Spanish and was a member of the swim team. Liz is a Louisville, Kentucky, native who lives in Indianapolis with her husband and two children. She enjoys swimming, reading, doing home improvement projects around her house and cheering on her two favorite basketball teams, the Kentucky Wildcats and the Xavier Musketeers.
Previous Starter Knife Set
Next Team Building at HPM Building Supply