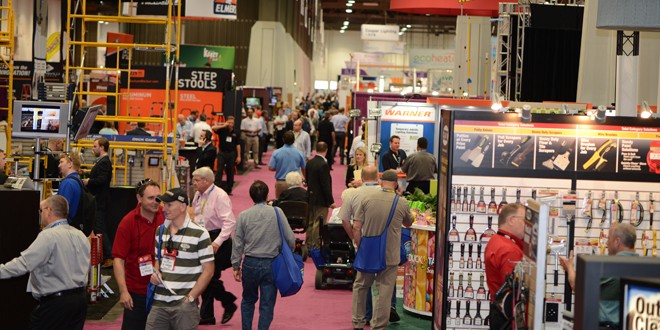 In 2016, the National Hardware Show® will be returning to its 2014 show floor layout, changing in response to research and customer feedback.

The National Hardware Show had occupied the central and north halls in the Las Vegas Convention Center for many years. However, the 2015 show was moved to the central and south halls to accommodate growth opportunities for additional exhibiting companies.

The return to the 2014 format will result not only in changes to the show floor layout, but also to the 2016 show dates. The show will run May 4-6, rather than starting May 3.

The show floor layout will more closely resemble the 2014 National Hardware Show and be organized as follows:

In addition, many of the popular Show features such as the North American Retail Hardware Association (NRHA) Village & Stage, New Product World and New Product Launch will move back into the lobby and into meeting rooms.

“During the 2015 event and since then, we have conducted extensive research and have had numerous conversations with both attending and exhibiting customers to ensure that our go-forward strategy in regard to layout of the show is in the best interest of attendees, exhibitors and the long-term future of the show,”says Rich Russo, industry vice president for the National Hardware Show.

The National Hardware Show is an event for global manufacturers, associations, organizations and the media to unveil new products, ideas and insight to a broad spectrum of home improvement resellers. For more information about the show, visit nationalhardwareshow.com.

Kate is profiles editor for Hardware Retailing magazine. She reports on news and industry events and writes about retailers' unique contributions to the independent home improvement sector. She graduated from Cedarville University in her home state of Ohio, where she earned a bachelor's degree in English and minored in creative writing. She loves being an aunt, teaching writing to kids, running, reading, farm living and, as Walt Whitman says, traveling the open road, “healthy, free, the world before me.”
Previous Major Regional Chain Joins True Value
Next When Merchandising Products, Look Upward