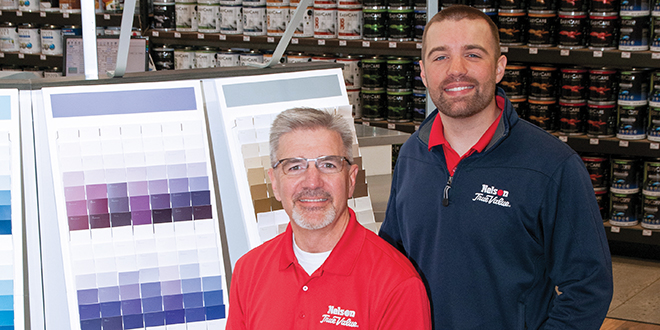 When Fred Nelson was ready to retire from retail ownership of the store he had owned and operated since 1954, he didn’t want to see the business come to an end. In his search for a new owner, he wanted to find someone excited about the opportunity, and ideally, someone who had children who might show interest in one day running the business.

So when Nelson approached Roy Kanis about taking on ownership of Nelson Agri-Center True Value in Viroqua, Wisconsin, in 1989, Nelson was confident the business would have a bright future. Roy’s son Dan Kanis graduated from college and began working as a sales representative for an agriculture company. In 1995, Nelson’s hope of a family leading his store forward became a reality when Dan entered the retail operation alongside his father and their manager and minority business partner, Mark Brueggen.

In 1998, Roy, Dan and Mark invested in a second hardware store about 50 miles away in Prairie du Chien, Wisconsin, which they renamed Nelson True Value.

Many more changes and updates have influenced the operation since then, but now, Dan’s son Jacob is the next in line to lead the Nelson True Value operation.

Growing the Business
While Dan was excited about Jacob or any of his children joining the family business, he knew he wanted them to attend college and get work experience outside of the store before making that commitment.

Jacob pursued his education and began his career with Menards and United Rental before returning to the business. According to Jacob, these jobs gave him an inside look at what worked and didn’t work in retail and rental.

In 2014, a fire destroyed businesses near Nelson True Value, and the team faced a new future when they decided relocate. “Our original location in Prairie du Chien had been in the same building since 1970,” Dan says. “Our store just had smoke damage after the fire, but we decided it was time to move. We worked with True Value and began planning a ground-up store, which we built in 2015.”

As they built the new store, Jacob was there to oversee construction. He also became the store’s manager.

“True Value was extremely helpful as we built our store,” Jacob says. “We used the Destination True Value program, and they helped us select planograms and products.”

A Passion for People
For Dan and Jacob, operating retail businesses in small communities is something they are passionate about.

“My favorite aspect of my job is working with customers,” Jacob says. “I wake up and look forward to coming to work every day, because I am helping our loyal customers.”

Dan and Jacob understand the importance of investing in the communities they serve.

Both stores face big-box competition from chains like Walmart and Tractor Supply Co., but the team believes employee knowledge and deep inventory help set them up for success.

A Future-Focused Distributor
Nelson True Value has been part of True Value since the mid-1970s, and according to Dan, the wholesaler has always been a supportive partner to their family business.

One area where Dan and Jacob have been able to improve and expand with help from their wholesaler is their rental department.

“In my opinion, True Value was really a pioneer in the store-within-a-store concept in regard to rental,” Dan says. “With their help, we got that program off the ground in the 1990s and now, rental is one of our biggest departments at both of our stores.”

Paint is another product area where True Value has helped the store stand out against competition. It was one of the first locations across the country to have the updated True Value Inspiration Realized color center, which is a modular program that can work in stores of all sizes.

The business utilizes other True Value programs, including its marketing and advertising initiatives, as well as the True Value Rewards program.

When True Value announced plans to sell 70 percent ownership of the organization to ACON Investments, Dan says he was skeptical due to his loyalty to the established co-op model.

However, Jacob had a more objective perspective, and they decided to use the return on capital to strengthen the future of the business.

“We took the money we got back from True Value and paid down debt,” Dan says. “My business partner and co-owner Mark is retiring, and I’m looking at retiring in the next six or seven years, so we’ve been able to use our money to focus on the transition to Jacob running the business. It really was a blessing.”

As the father-son team continues to focus on the future, they know they can count on True Value to provide innovative products and programs to help the business succeed.

“True Value has new and fresh ideas, from pricing and products to logistics,” Dan says. “We really appreciate their focus on changing and strengthening their advertising and marketing program, which has a strong focus on digital and social media. And the True Value Rewards program has also been a fantastic way for us to connect with customers and build stronger relationships. Getting people to walk in the door is crucial right now, and marketing and Rewards are two ways we can continue to do that.”

Renee Changnon is the retail outreach coordinator for NRHA. She meets with retailers in their stores and at industry events and introduces them to the services NRHA provides. Renee previously worked as a member of the NRHA communications team. She earned a degree in visual journalism from Illinois State University, where she served as the features editor for the school newspaper. After college, she implemented marketing and promotions initiatives at Jimmy John’s franchise locations across the country. She enjoys exploring books with her book club, Netflix marathons and hosting goat yoga at her apartment complex. Renee Changnon 317-275-9442 rchangnon@nrha.org
Previous Retail Experiences Strongest Holiday Shopping Season in 6 Years
Next True Value CEO Discusses Strategic Plan, Future