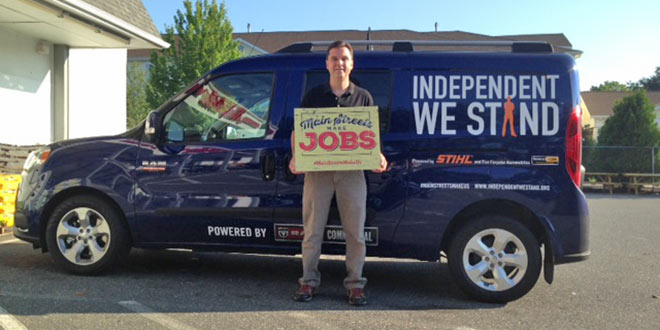 Whether your local Main Street is already established or is in great need of a makeover, a new online contest promises to liven up one of America’s Main Streets and allows the country to have a hand in making it happen.

“The goal of this inaugural Independent We Stand ‘America’s Main Streets’ contest is to promote the importance and strong economic benefits of Main Streets and the small businesses that help them thrive,” says Independent We Stand co-founder Bill Brunelle. “We expect to see communities rallying for their Main Streets simply by going online and encouraging others to do the same. We want to know what already makes your Main Street tick or what you think would make it even better.”

To help spread the word about the contest and spread awareness for independent businesses, North American Retail Hardware Association (NRHA) assistant editor Renee Changnon will join the Independent We Stand team to embark on The Great American Route 66 Road Trip, which runs March 14-18.

The trip kicks off in Oklahoma City, Oklahoma, and will continue through Amarillo, Texas; Albuquerque, New Mexico and Flagstaff, Arizona; and end at the Santa Monica pier in California. The goal of the trip is to visit at least five cities in five states within five days. The team will shop, stay and eat local the entire trip.

The online contest is already underway, and voting is already in process. Nominations and quarter-finalist voting runs March 1 to April 24. Semifinalist voting takes place May 2-29, and the winning Main Street will be announced on June 3. On July 4, the America’s Main Streets winner will announce its plans for the $25,000 grand prize.

To vote for or nominate your Main Street, go to www.mainstreetcontest.com. If your Main Street is added to the list, be sure to spread the word in the community and encourage voting.

To follow along with NRHA and Independent We Stand on the Great American Route 66 Road Trip later this month, stay tuned to Hardware Retailing‘s website and social media.

“We are very excited to have NRHA join us for a second road trip, and we look forward to the stories they help us tell along the way,” Brunelle says. “A big part of the appeal of Route 66 is that it offered Americans a road to success, and NRHA has been doing the same for its members for over 100 years.”

Renee Changnon is the retail outreach coordinator for NRHA. She meets with retailers in their stores and at industry events and introduces them to the services NRHA provides. Renee previously worked as a member of the NRHA communications team. She earned a degree in visual journalism from Illinois State University, where she served as the features editor for the school newspaper. After college, she implemented marketing and promotions initiatives at Jimmy John’s franchise locations across the country. She enjoys exploring books with her book club, Netflix marathons and hosting goat yoga at her apartment complex. Renee Changnon 317-275-9442 rchangnon@nrha.org
Previous Walmart Expert to Speak at NRHA All-Industry Conference
Next NRHA Provides New Training Resources