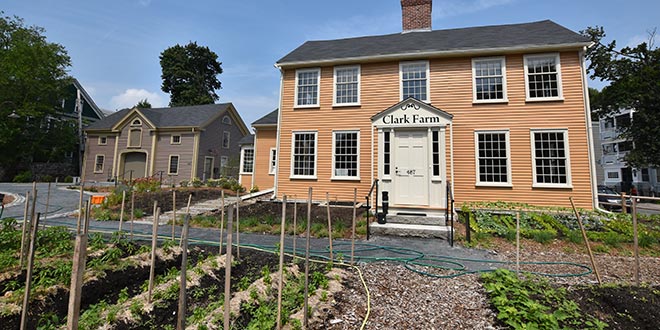 When the Fowler Clark Epstein Farm was first built in the late 1700s, its owners contributed to the everyday life of the colonial community by farming the then-rural area.

Now, more than 200 years later, it is once again a vital part of the historic Boston neighborhood of Mattapan, thanks to the collaboration of nonprofits and the donation of time and reduced costs of resources by companies like Norfolk Hardware & Home Center.

The Fowler Clark Epstein Farm remains among the earliest intact examples of an agricultural property in the Commonwealth’s cities and is located on land that was once part of a large Dorchester estate covering more than 330 acres, according to Historic Boston Inc. (HBI).

The farm was owned by three families over the years and was eventually purchased by HBI in 2015 with the goal of preserving the farm and turning the space into the organization’s headquarters. The Urban Farming Institute also uses the space as its farming education and training center.

“Jerry Rosen, an associate from our paint department, met someone from Historic Boston Inc. when they came to the store and told him about the plans for the project. He then passed their information along to me,” Blake says. “I talked to HBI about Norfolk Hardware & Home Center providing a discount on paint. After more discussions, we learned there was also a need for a new kitchen.”

That’s when Blake says they brought their designer Eric Rainey from Norfolk Kitchen & Bath into the project. To design the kitchen, he worked with architect firm Perkins & Will Architects and with Lisa Lewis from HBI and Barbara Knecht from the Urban Farming Institute. Norfolk Kitchen & Bath heavily discounted the materials and supplied cabinets to bring an added flourish of warmth and charm to the project.

Blake says they were initially surprised the HBI and Urban Farming Institute wanted to go with a contemporary kitchen design in a historic building, but she says the architect was able to tie the modern design into existing features to connect it with the building’s historic roots.

“It was wonderful working with Lisa and the entire team at HBI,” Blake says. “What I find so cool is that HBI finds properties with historic value, purchases them, preserves them and incorporates them into useful and current spaces, like they did with the Fowler Clark Epstein Farm. Plus, it’s just around the corner from our hardware store. It’s nice to see the renewal in that area.”

Although Blake says the Norfolk Hardware & Home Center is approached with requests for donations frequently, they like to do anything they can to help with housing- and community-related projects when they can, whether its by donating materials or time.

“We enjoy collaborating and working with others,” Blake says. “The Fowler Clark Epstein Farm was a great project to contribute to and we are excited about what it can continue to do to benefit our community.”

Renee Changnon is the retail outreach coordinator for NRHA. She meets with retailers in their stores and at industry events and introduces them to the services NRHA provides. Renee previously worked as a member of the NRHA communications team. She earned a degree in visual journalism from Illinois State University, where she served as the features editor for the school newspaper. After college, she implemented marketing and promotions initiatives at Jimmy John’s franchise locations across the country. She enjoys exploring books with her book club, Netflix marathons and hosting goat yoga at her apartment complex. Renee Changnon 317-275-9442 rchangnon@nrha.org
Previous Hardware Retailing November: Conveying Leadership
Next Protective Dog Coat