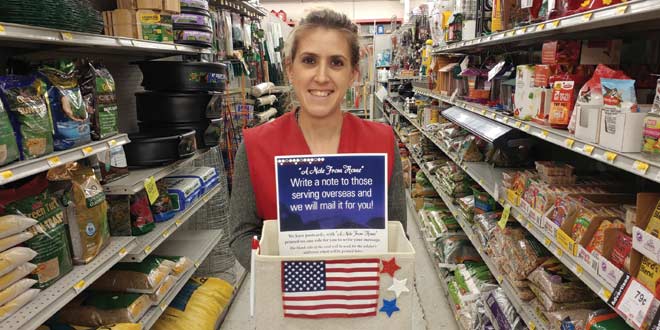 Veteran Brad Chrisman, manager of Mills Ace Hardware in Lincoln City, Oregon, says mail call for soldiers who are stationed overseas can be a trying experience. “Nothing’s worse than being one of those guys who didn’t get anything.”

So when Chrisman was approached by a customer about implementing a Notes for Soldiers program in the store, it was an easy call to make. “It’s important to let soldiers know they haven’t been forgotten,” he says.

The program is simple: The customer brought a box to leave at the checkout counter and left postcards in it for customers and employees to write letters to soldiers.

Mills Ace has two locations in Lincoln City, and both stores participate. Other businesses in Lincoln City are taking part as well. Every Friday, the customer picks up the cards and mails them out. Just two months into the program, more than 300 postcards have been mailed.

“This program really resonated with the community, and it helps Mills Ace not just be a business in the community, but really be a part of it,” says Chrisman.

The program resonates with employees, too, he says. “More often than not, more cards are filled out by employees and their families.”

Over the holidays, employees took blank cards home for family members to fill out. Holiday cards were donated by a local retirement home.

Chrisman sees this program lasting a long time. “It’s really popular during the holidays, but it will definitely be something we do year-round.”

Lynnea is the senior graphic designer for Hardware Retailing magazine, where she works on the layout and design of the magazine and other custom publications. She also does print design for NRHA’s marketing materials, programs and other in-house projects. Lynnea graduated from Ball State University with a degree in Graphic Design. She lives in her hometown of Greenwood, Indiana. During her free time, she enjoys designing, painting, reading and volunteering at her family-owned childcare facility.
Previous Lowe’s Makes Another Round of Corporate Layoffs
Next Reusable Juice Boxes