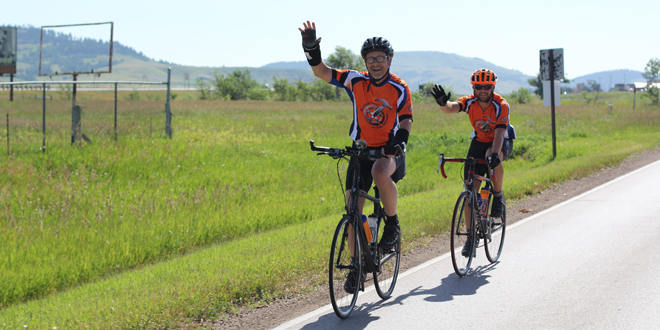 Volunteers bike across the U.S. in 2014 to raise funds for The Fuller Center for Housing.

The Fuller Center for Housing is sending bicyclists on a fundraising ride across the nation — and the North American Retail Hardware Association (NRHA) is helping pay for service projects along the way.

Bikers participating in The Fuller Center fundraiser, which is a 4,000-mile ride from California to Maine, will stop in five communities to serve. NRHA will present a $1,000 grant in each community, for projects planned for Rancho Mirage, California; Kansas City, Missouri; Peoria, Illinois; Indianapolis; and Aurora, Ohio. The Fuller Center is a nonprofit organization that works to eliminate poverty housing.

“The purpose of the NRHA grants is twofold – first, as an organization, we want to support the great work The Fuller Center does to help families have a decent place to live. Second, we want to help build a relationship between independent dealers and The Fuller Center’s local partners,” NRHA president and CEO Bill Lee says. “What better way for an organization chapter to begin a relationship than by spending a $1,000 grant at their local hardware store, home center or lumberyard?”

Details of the bike trip projects haven’t been finalized, but they include community cleanup work, building and painting a fence, landscaping and replacing a military veteran’s home roof and windows.

The Fuller Center Bicycle Adventure will start in June, end in August and cross 14 states. Volunteers can sign up for the coast-to-coast ride or take shorter trips. The Fuller Center’s fundraising goal is $200,000.

Kate is profiles editor for Hardware Retailing magazine. She reports on news and industry events and writes about retailers' unique contributions to the independent home improvement sector. She graduated from Cedarville University in her home state of Ohio, where she earned a bachelor's degree in English and minored in creative writing. She loves being an aunt, teaching writing to kids, running, reading, farm living and, as Walt Whitman says, traveling the open road, “healthy, free, the world before me.”
Previous First Quarter Results for Home Improvement Big Boxes, Co-Ops
Next Stanley Black & Decker Provides Scholarship for NRHA Retail Management School