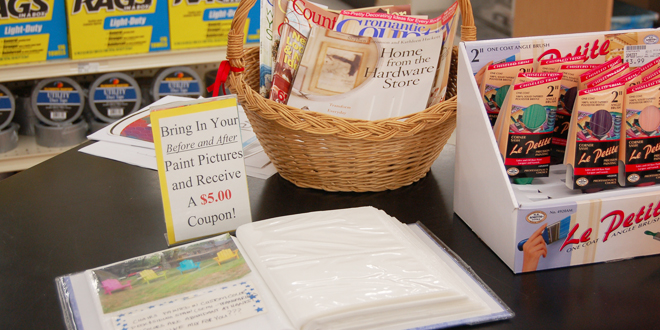 The idea came from a customer who brought a photo album into Horicon Hardware Hank to show off pictures of a room she remodeled.

The customer had bought her paints and other products from the Horicon, Wisconsin, store, and was eager to display the results of her DIY project.

Following her lead, store owner Dave Konrath got a photo album and stuck it on a table in his paint department so other customers could share pictures of their successful projects. He also placed a small sign on the table offering a coupon for $5 off a customer’s next paint purchase for contributions to the album.

Customers sit at the table while they flip through magazines to get project ideas or while they wait for their paint to be mixed, and while they’re at it, many of them take a look at the album.

The photos don’t just allow customers to showcase the projects they’re proud of, but they also offer ideas for other shoppers, Konrath says.

The idea is simple and inexpensive, and would be easy to replicate in any store that has a paint department.

Kate is profiles editor for Hardware Retailing magazine. She reports on news and industry events and writes about retailers' unique contributions to the independent home improvement sector. She graduated from Cedarville University in her home state of Ohio, where she earned a bachelor's degree in English and minored in creative writing. She loves being an aunt, teaching writing to kids, running, reading, farm living and, as Walt Whitman says, traveling the open road, “healthy, free, the world before me.”
Previous Retailer Turns Store into Temporary Art Gallery
Next Labor Union Challenges Menards Employee Agreement