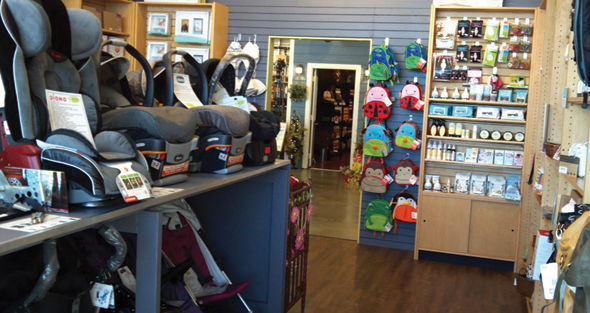 Most consumers head online or to toy stores when they’re looking for gifts for babies or toddlers. But the residents of Dubuque, Iowa, go to Steve’s Ace.

It might seem a little odd to go to a hardware store for baby goods, but inside Steve’s Ace customers will find SPROUT, a boutique full of children’s clothing, toys, strollers, gifts and more.

Sara Carpenter, the store’s garden manager, started SPROUT about three years ago as a 4-foot section within the store’s gift area. At the time, she was pregnant with her first daughter and was having trouble finding certain specialty baby items.

“I quickly realized there was a need in our market,” she says. “Expecting families had to shop online or leave town to make baby-related purchases.”

Carpenter faced a lot of resistance to the idea of adding a baby boutique in the hardware store at first.

“The joke was, ‘I hope this works. Otherwise, you just bought yourself a lot of cloth diapers,’” she says.

No one is scoffing at the idea anymore. As the buzz around town grew, so did the size of the baby item display. In fact, last November, the Steve’s Ace team expanded the small display into its own store-within-a-store concept.

“The demand just kept growing,” Carpenter says. “People started asking for more items, such as diaper bags or glass bottles, and we continued to add them. All the products we sell at SPROUT have an eco-friendly or innovative twist. They’re things that are unique to the market.”

Today, Carpenter and her sister, manager/buyer Tricia Kerth, run the boutique. Before SPROUT officially opened, they did extensive due diligence by attending several trade shows to explore potential inventory.

SPROUT was so well received by the community that Carpenter decided to create another boutique.

Last summer, the Steve’s Ace team transformed another of the store’s niche areas, which was dedicated to gourmet foods and wines, into SPROUT TOO, which carries larger items, such as strollers and car seats.

To help develop the store as an authority, the sisters also became certified car seat technicians.

“We sell car seats, so we wanted to be able to help customers safely and properly install them in their cars,” Carpenter says. “We went through a four-day safety program in Des Moines and now regularly do car seat checks, both at our own store and at other local events.”

She says the margins on many of the baby-related products are very high, and the products move quickly despite the high price tags on some of the merchandise.
“We’ve learned not to assume a parent won’t buy something just because it’s expensive,” Carpenter says. “In fact, some of our riskiest or most expensive purchases have been some of our biggest sellers.

“These are emotional purchases, and parents—especially first-time parents—want to buy products they know can be used with all their future children,” she says.
Some items, such as strollers and car seats, have margins between 30 and 40 percent, but Carpenter says most of the products have margins of 50 percent and higher. And it’s easy for Carpenter to buy just one or two of a particular product from suppliers.

“I think we’ve been successful because not only do people see that we have interesting things, but they see everything is useful,” she says. “We don’t have much fluffy stuff, and it’s different from what you’d find elsewhere.”

Liz is the special projects editor for Hardware Retailing magazine. She reports on news and trends, visits retailers, and attends industry events. She graduated from Xavier University, where she earned a degree in English and Spanish and was a member of the swim team. Liz is a Louisville, Kentucky, native who lives in Indianapolis with her husband and two children. She enjoys swimming, reading, doing home improvement projects around her house and cheering on her two favorite basketball teams, the Kentucky Wildcats and the Xavier Musketeers.
Previous Miter Angle Finder
Next ‘Tis the Season to Shop at Woodstock Hardware